If you're on a romantic stroll through Central Park in New York City anytime soon and decide you'd like a gondola ride on the lake uptown, your gondolier might well turn out to be a Brown alum. Just ask, and Liam Pierce will serenade you with "'O Sole Mio'" or "That's Amore." If you want to get married on board, he'll obligingly pop the champagne corks and hold the ring. And of course he'll row the boat, a genuine gondola. "My weeks are crazy, five to eight hours of rowing on a day," says Pierce. "It's a really difficult boat to maneuver." 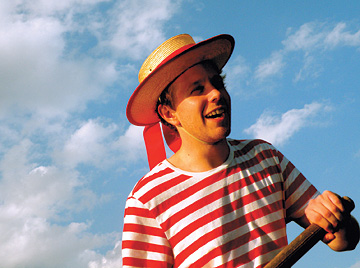 Pascale Boucicaut
Paddling around the Central Park Pond, Pierce gets an eyeful of city life.
After Pierce graduated from Brown, he landed an internship at The New Yorker, just about the most desirable gig a recent college grad can get in journalism. But budget cuts eliminated the position and the Oakland, California, native needed cash. Sure, he could have done something more straightforwardly intellectual and in line with what you'd expect from a Brown alumnus, but he chose to go with the rowing experience he'd picked up a few years earlier plying the waters of Oakland's Lake Merritt in a gondola. "I exchanged a life of paper cuts earned in an office for one with splinters from an oar," he says. He started at Central Park in June 2009.

"People are dying to get the job," Pierce says. The base pay is $6 an hour, on top of which he makes $15 per half-hour trip—plus tips. The gondola is operated by the Boathouse Restaurant, at the northeastern tip of the lake, and unlike the canals in Venice there's no competition from other gondolas. He says he stood out from other applicants because he had previous experience.

Pierce, who hopes in the long-term to become a nonfiction writer, says his job is great for people watching. He's had parents put their kids on his boat, then walk off and leave him to babysit. A drunken woman nearly fell overboard, and after her boyfriend saved her she sat down on the boat floor and "half-laughed and half-cried," Pierce says.

Then there was the couple that got, well, a little too intimate for Pierce's comfort. "You're stuck on a boat and you have a perfect view of what's going on," he says. "You get to see New York at its rawest." But mostly what Pierce witnesses are wedding proposals. "The writer in me would get some guilty pleasure if someone said no," he says. "But I can't even watch those America's Funniest Home Videos when [people] get knocked on the head. I just couldn't handle it."

Pierce blogs about his experience at centralparkgondolier.blogspot.com. He often starts out a cynic but can't help winding up a romantic. Last October he described rowing into a tunnel for a wedding ceremony. "Now, in terms of locations for a ceremony: Excellent. The walls arched, creating a beautiful cathedral of perfect acoustics. In terms of gondola parking: difficult.... It's shallow and tight, and not wide enough to turn around in. But yesterday it worked perfectly. Spun the boat around, and backed it up like a Mack truck."