The Art of Memory

Dawn Clements '86 remembers sitting in the dark in a Brown film class, frantically scribbling notes while watching Fassbinder's Berlin Alexanderplatz. There was no pause button then, and the projector relentlessly moved the film forward. Today Clements has turned her liking for both movies and note-taking into a strategy for making extraordinary art. Her drawing Mrs. Jessica Drummond's ("My Reputation," 1946), based on a Barbara Stanwyck film, is included in the 2010 Biennial at the Whitney Museum of American Art in New York. Clements is not the only alumna in the show. Kerry Tribe '97, another visual art and semiotics concentrator, contributed H.M., 2009, a film installation exploring the fragility of memory.

Courtesy Pierogi 2000
Dawn Clements based her drawing on the Barbara Stanwick film My Reputation.
These powerful and prepossessing works grace one of the most impressive Biennials in recent years—and the first one to include more women than men. Traditionally controversial, the Whitney Biennial has often drawn disdain and second guesses from artists and critics alike. This year, however, the curators have assembled a resonant sampling of contemporary art that is at once compelling and grounded, and critics have been appreciative. Much of the work, certainly Clements's and Tribe's, manifests a rediscovered attention to human vulnerability and craft.

Tribe's installation conveys the experience of an epilepsy patient, H.M., who has had part of his brain removed and can remember only the past twenty seconds. The film combines reenactments of interviews with him along with scientific animation, text, and archival images of historic events he can't remember. Tribe says she became fascinated by amnesia as an undergraduate, when her grandfather began to lose his memory. She originally made films about her own family but soon moved on to narratives with broader ramifications.

To evoke H.M.'s condition, a single filmstrip is threaded through two side-by-side projectors and runs at a staggered twenty-second interval. The repetitive structure and stuttering pace mirror H.M.'s strange world; it evokes the brief span in which his cognition matches external reality and, beyond that, the ephemeral nature of human perception. 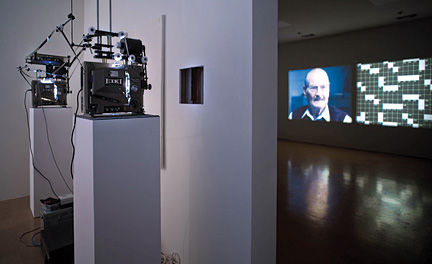 Courtesy 1301PE
Kelly Tribe uses two projectors to simulate the disconnect of memory loss.
"Editing the film was tricky," Tribe says. "Instead of working on one image at a time, I had to remember which frames would ultimately be playing side by side." The film is conceptually brilliant, technically accomplished, and, above all, affecting.

While Clements was composing the drawing, her father died in a bicycle accident. After his funeral, she found the meticulously iterative process of marking paper well suited to mourning. "As I worked, I realized that the piece was about both my father's death and my mother's grieving," she says. Drawing at a small table, she added sections as necessary to coax the piece to resolution, simulating the process of grieving. Skillfully using simple tools—a ballpoint pen and thick drawing paper—Clements deftly fuses the iconographic and the personal.

Both artists say Brown's rich intellectual community advanced their early artistic development and nurtured their love of cinema. "We studied film theory and psychoanalysis as well as film production," says Tribe, who now splits her time between Los Angeles and Berlin. "Embracing larger intellectual concerns and thinking structurally about documentary film as an art form has served me extremely well."

Clements doesn't work in film, of course, and she's had to moderate her passion for movies. "I used to watch up to three a day," she says, "but lately I've been drawing from life." She is now creating work for upcoming shows in New York City and Los Angeles. Tribe is currently preparing projects for museum exhibitions in Europe.

Sharon L. Butler, an artist and writer, blogs at Two Coats of Paint.

Reader Responses to The Art of Memory