Interior designer Sara Gilbane is drawing raves for bringing a modern twist to traditional style. In January, House Beautiful named her one of the top twenty rising stars of interior design. In February, the online design magazine Lonny (lonnymag.com) ran a feature-length profile about her. 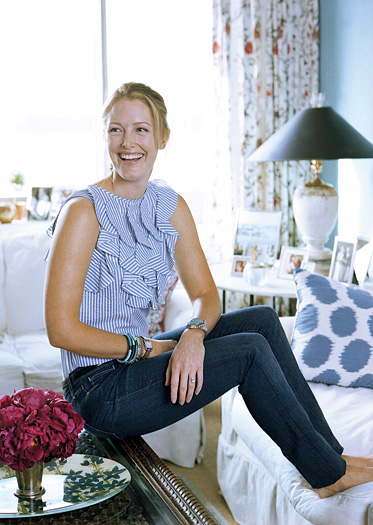 Anna Wolf
Sara Gilbane in her living room; she painted it vivid turquoise with a vermillion border.
Gilbane says she developed her sensitivity to the history of a place —as well as an innate understanding of building and architecture—early on. Raised in East Greenwich, Rhode Island, Gilbane was carried as a toddler to various construction sites by her father, Robert V. Gilbane '70, president of Gilbane Development Company. Dating back to 1873, the firm has constructed some legendary American spaces, ranging from Washington, D.C.'s National Air and Space Museum and Vietnam Veterans Memorial to the winter Olympics facilities in Lake Placid, New York. The Gilbanes have strong ties to Brown (alums on her father's side include her father, uncle, and grandfather; on her mother's side, several Buxtons are alums), and the company built the Brown president's house on Power Street. No wonder her concentration was history. "I have always loved history," she says.

Gilbane's rooms often mix heirloom pieces with contemporary colors and fabrics. Her own living room has turquoise walls, white-canvas sofa slipcovers, and ikat-fabric throw pillows. "If you take an English rolled-arm sofa and reupholster it with contemporary fabric, that juxtaposition of traditional and modern equals style," she notes.

Her rise in the interior design world has been rapid. While working for her family's business after graduation, Gilbane studied drafting, scale, and color theory at RISD. Then she headed to New York City, where family friend Celerie Kemble hired her as an apprentice designer at the noted firm Kemble Interiors. There Gilbane learned to design everything from Greenwich Village apartments to Park Avenue penthouses.

She opened her own firm, Sara Gilbane Interiors, in January 2008, and its headquarters remain in the living room of her West Village apartment. "It was crazy, and I worried that the phone wouldn't ring, but I believed that hard work coupled with risk can pay off," she says. It's a lesson she says she learned in the entrepreneurship course taught by Professor Emeritus of Engineering Barrett Hazeltine.

Gilbane's current projects include a Manhattan loft and a house in Connecticut. Still, even with the constant flow of new design jobs, she's thinking ahead to new ventures. "My husband and I are in Rhode Island a lot in the summertime," she says, "and we'd love to get a beach house in Newport. It would be fun to buy homes, fix them up, and sell them." So muses this fifth-generation member of a builder's family.

Reader Responses to Updating the Past