When Did Slavery End?

With Barack Obama in the White House, some have suggested that it's time to quit talking about the atrocities perpetrated against African Americans and to focus on our so-called post-racial society. But that would be a mistake, Pulitzer Prize–winning Wall St. Journal reporter Douglas A. Blackmon told a Sayles Hall audience of about 140 at the inaugural Debra L. Lee '76 Lecture on Slavery and Justice on April 27. 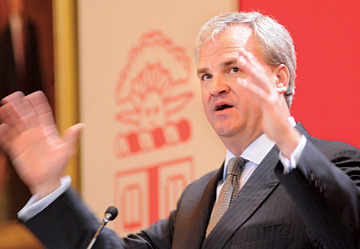 Frank Mullin
Blackmon explained how slavery lingered long after the Emancipation Proclamation.
In order to understand contemporary race relations, he said, Americans first need to understand the wrongs done to blacks and their subsequent cover-up. In Slavery by Another Name: The Re-Enslavement of Black Americans from the Civil War to World War II, Blackmon argues that instead of ending with the Emancipation Proclamation, slavery simply morphed into other forms. Across the South, for example, freed blacks found themselves arrested for trumped-up crimes: selling produce after dark, or walking beside a railroad car, or talking loudly to a white woman in public. Vagrancy was criminalized, and black men who couldn't produce proof of employment were thrown into jail

Unable to pay their fines, thousands of these men were then leased out by county officials to corporations and forced to labor under conditions that were often worse than those back in the days of slavery. Thousands of men, for example, were shackled and forced to work in coal mines from before dawn until after sunset; often the only water to drink was what puddled around their feet.

"Why would a white guy who works for Rupert Murdoch and the most conservative paper in the United States write a book about this?" Blackmon asked. He explained that he'd grown up in Mississippi and entered first grade in 1970, just as desegregation was arriving. At school, he said, "I knew all the black kids were mad at me for reasons I couldn't tell. So I was mad back." The white kids enrolled in new private schools established in response to desegregation were mad at him, too. "It was clear to me that something was really remiss about this," he said.

Slavery didn't end 150 years ago, Blackmon said; it ended fifty years ago, recently enough that the grandparents of many black Americans today remember it all too clearly.

Reader Responses to When Did Slavery End?