For Nicole Brewer, being dubbed a loser was life-changing. 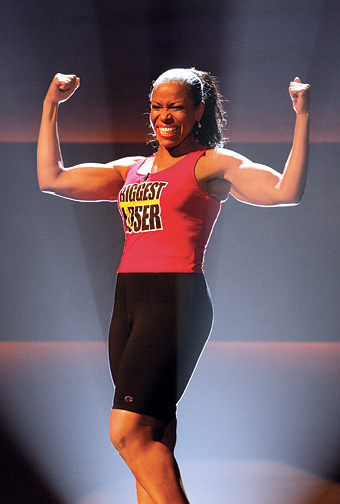 Chris Haston/NBCU
On the season finale Brewer showed off the progress she'd made.

In September 2008, she appeared on NBC's hit television show The Biggest Loser, on which contestants compete to see who can lose the most weight in a season. The biggest loser wins $250,000. Brewer was eliminated after only one week, but, sent home with a one-year gym membership and increased knowledge about nutrition, she devised a successful workout routine for herself. By December she had gone from 269 to 182 pounds. She returned to the show and again was quickly eliminated, but can now say, "What I learned was that I was capable of doing a lot more than I thought I could do. It's no magic trick. It's diet and exercise and making sure you're eating the proper way."

When Brewer entered Brown as a premed student, nutrition clearly was not on her curriculum. A self-described "comfort-food eater," she went for the "heart attack" sandwiches at Louie's restaurant on Brook Street and late-night pizzas from the Gate. Instead of the standard freshman 15, she says, "I put on the freshman 50, but it was a weight I felt comfortable in."

By the time she graduated, Brewer had abandoned medicine for the arts, so she moved to New York City, where in 1995 she landed a job at the clothing company Esprit. From there, she moved to Mode Magazine, which is aimed at women size 12 and up, and then to Essence, where as fashion director she highlighted designers who were producing clothes for plus-size women. But, as Brewer remarks, "As I grew in the fashion industry, I grew in my waistline. Helping women look good and feel good no matter what their size became my mission and mantra in life."

In 2005, weighed down by the stresses of the changing magazine industry, her mother's failing health, and her own health problems, Brewer joined a water aerobics class, a regimen she'd heard worked for Mariah Carey. At the gym she met Damien Gurganious, an overweight industrial designer. The two began exercising and losing weight together until the unexpected death of Brewer's mother in March 2007 from heart disease. Devastated, Brewer gained back all the weight she'd lost.

Increasingly concerned about her weight, Brewer decided to audition for The Biggest Loser. She went on with Gurganious, now her husband. At the start of the season, Brewer weighed in at 269 pounds and her partner at 381.

Brewer was knocked off the show by bigger losers, but she didn't let that stop her. On May 12, 2009, at the show's finale, she and Gurganious returned—with a combined weight loss of 260 pounds.

Brewer still appears regularly as a fashion stylist on such television shows as the View, Entertainment Tonight, and Access Hollywood. But by night, she and Gurganious, now certified fitness instructors, teach classes at a 24 Hour Fitness gym in Manhattan. Last year Brewer completed the Philadelphia marathon. Eventually she'd like to start a running club for full-figured women who feel they can't run. And she hopes to start her own healthy family. "It would have been nice to be crowned the Biggest Loser, but when people see me and ask did you win? I say, yes, I did. I won my life back—a fabulous new life."

Reader Responses to Winning Isn't Everything