For a long time now, Americans have been able to go to a charity’s web site, peruse listings from all over the developing world, and pick out an individual or family they want to support financially. Kate Kolbert-Hyle and several of her classmates decided Americans should be able to help Americans in the same way. So they created CO-Fund, a nonprofit organization that pairs small and large philanthropists with Rhode Island students who can’t afford college. 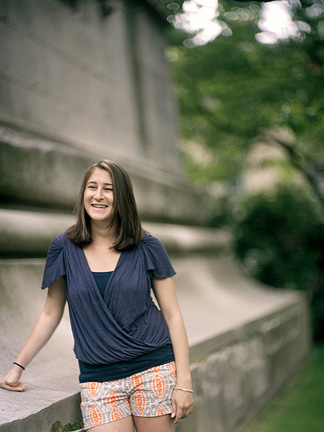 Kolbert-Hyle and her partners in the project, Cody Simmons ’10 and Kayle Gishen ’12 began working on CO-Fund last September. “This year has been a lot of CO-Fund, but in a good way,” says Kolbert-Hyle, who grew up in Philadelphia and majored in public policy. She says the experience has taught her about the intricacies of building a charitable organization that would persist even after she graduated.

Perhaps the most difficult task was choosing which individuals to list on the website. Dozens of students applied from across the state, most of them needy and deserving. But Kolbert-Hyle and the others decided that, for their pilot program, they would choose only four. “It was an excruciating decision,” Kolbert-Hyle says.

The three seniors interviewed applicants and asked them to write essays and send letters of reference. They also imposed some restrictions on the recipients of they money. The students, for example, should already have qualified for financial aid from their colleges, and the aid had to be insufficient to cover their bills. Recipients also had to sign a contract pledging to repay in kind the money they had received. Among their options were to complete 100 hours of community service, work for CO-Fund or a partner organization for a year, or donate one-fifth of the money they received to another CO-Fund after graduating and working for five years.

In the end, CO-Fund’s leaders chose four low-income students to put up on the site when it went live in May. They include James from Shea High School in Pawtucket who is bound for Pace University in New York and Makayla, a freshman at the University of Rhode Island whose financial aid package is $7,000 short of what she needs to live on. (For privacy reasons, the students’ last names aren’t given). In her profile on the site, Makayla writes, “I’m determined to graduate from college because I want to make my parents proud. Even though they passed away, it was their goal for me to go to college and live a better life than they did.” Within just a few days, all four of the candidates had received anywhere from 14 to 20 percent of the total money they need.

Next year, Kolbert-Hyle is bound for Mountainview, California ,where she will work for Google’s marketing department. Naturally, she’s worried about balancing the responsibilities of her new job with her work for CO-Fund, which is why the group is now looking to hire an executive director. CO-Fund was the “perfect capstone to my interests” in public policy and entrepreneurship, Kolbert-Hyle says. “It’s been a total learning experience for me, which I loved.”