When I was in kindergarten my mom enrolled me at a conservative Christian school. There I was guaranteed to hear biblical stories at least five days a week. Many were light-hearted, while others still continue to haunt me at 21 years old. Like the story of Jonah, a young man who was lost at sea during a fierce storm and then swallowed by a whale. Oddly enough, Jonah was not killed. Instead he lived inside the whale’s belly, praying in the dark for his safety. After three days the storm passed, and the whale miraculously returned Jonah to the safe shore. 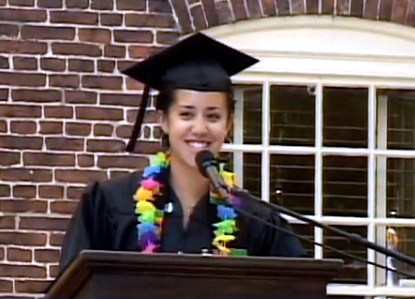 View a video of Gellein delivering her address here.
To most, whales are considered to be calm, peaceful, and generally friendly creatures. However Jonah’s story never really sat well with me, and to this day I still harbor an irrational fear of whales, one that stems from a recurring dream of mine. In it, I find myself standing on a diving board stories above an ocean, and a humpback whale fully breaches just below my feet.

Other nights I am kayaking across a clear blue lake and a beluga whale unexpectedly brushes against my paddle. Regardless of the setting, one truth remains: That whale is waiting for me. It wasn’t until last January that I shared this fear with my roommates at Brown. After rolling in laughter at my embarrassment, my friend found a website with dream interpretations. She said, “Tati, it says dreaming about whales means you are trying to get in touch with your inner spirit ... The whale symbolizes something bigger than yourself, some sort of anxiety.”

You know, the funny thing about whales is that after you get over their size, they are incredibly fascinating creatures. The more I read about whales, the more I began to discover how they have managed to surpass the test of time for thousands of years, with unique characteristics like tough skin and adaptability.

Lately I like to think that I too inherited some unique qualities, like survivorship, from my predecessors. In 1947 my grandmother arrived in the United States as a Japanese immigrant. She was eager to start a new life for her five children. However, World War II prejudices and chronic mental illness plagued her for years. My mother, also determined to ensure her kids a brighter future, worked three jobs at times just to make ends meet. For that and so much more, I thank you Mom. As I grew older, I realized the torch was passed on to me. My dreams included an early recognition that I wanted to become a physician, a dream that started to grow the moment I picked up my first Fisher-Price stethoscope.

You see, I was born and raised in Seattle. When people hear of Seattle, most think of Starbucks, Bill Gates, and Grey’s Anatomy. Very few consider the port city a breeding ground for severe poverty, with its fair share of housing projects and gun violence. In growing up under such circumstances, I often questioned my larger-than-life aspirations.

Most of the kids around me had shifted their dreams a long time ago, once their brother was arrested for selling drugs, or their cousin dropped out of high school because she was pregnant. I continuously questioned if my dream of becoming a doctor was too big; that somehow being poor and black, I was inadequately built to reach that goal. I began to wonder if my big dreams were an endangered species in my own habitat. However it was my acceptance into Brown and our Program in Liberal Medical Education that marked a pivotal chapter, one that would forever re-write my future.

While I celebrate this accomplishment today, I recognize that my vision was not solely my own. When we entered the Van Wickle Gates four years ago, each of us was carrying our own family’s aspirations. Indeed, looking back, I realize that the whale in my dreams did not represent an overwhelming fear of my inadequacy, but rather the weight of a collection of past ambitions.
My dreams, all of our dreams, are culminations of those sitting around us today — friends, family, those back at home, and generations far preceding us. If I were to pick up where my parents left off, I needed to adapt to this larger pool.

So when I moved into Keeney our first year, I was confident that my professional goal was large enough. I began to interact with other big dreamers, all of you, and my vision kept expanding. Suddenly I wanted to learn how to perform West African dance, what languages people spoke in Morocco, where I could attend spoken word performances. Whether it’s through the many student activities available, the Open Curriculum, or our eclectic population, Brown allows its students the freedom to create their own strategies for fostering dreams into realities. Dreams that positively affect our communities. Moreover, we have learned to never fall victim to the notion of “impossibility,” a euphemism for giving up on dreams prematurely.

In these last four years I lived in a surreal, dream-like state, happy to gain more than I ever anticipated: life-long friends, an unparalleled education and the “freshman fifteen.” Above all, we have learned at Brown how to extend our hugs across divisions of politics, religion, class, race, and sexual orientation.

Together, we witnessed what the world once considered impossible: our election of the first African American president last November. There, surrounded by my friends, I realized something about my own recurring dream: every time I felt scared around a whale, I was always by myself. Yet at Brown, this was never true. Now, we might be facing bigger fears beyond those gates than we ever anticipated, like finding a job in a struggling economy, moving to an unfamiliar city, or paying off those astronomical loans.

Despite the ebbs and flows of our future plans, it is imperative to remember that we never were and never will be alone. Brown has been, and will forever be our safety net, the link that connects us all. This bond allows the negativity and fear to slip through the mesh, allowing us the chance to catch each other’s big dreams. It is this steadfast wave of love and energy that will carry us safely wherever the unfamiliar waters take us. I guess Jonah had it right all along. Congratulations to my fellow graduates of the Class of 2010: We did it!