At first I was stunned. I had participated in voter registration drives and had even picketed the Woolworth's in downtown Providence to support the black students down South who were protesting the retail chain's segregated lunch counters. But president of Brown's first-ever chapter of the NAACP? I was a middle-class white guy who had grown up unaware that racial discrimination even existed. I wasn't ready to lead the group. 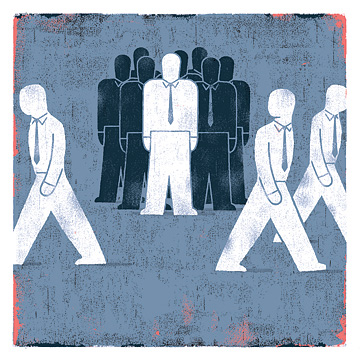 Here's how it happened. In the fall of 1960, the chapter's adviser from the United Christian Association (UCA) had spoken to our group at St. Stephen's Church about selecting a president. About ten of us were there, including one black student. No one was interested in the presidency. When the adviser told me, "We think you would be a good leader of the NAACP," I was flattered. Vanity made me eager to believe her. I accepted the position and pushed my doubts aside.

I was also rushing a fraternity at the time. I had worked hard to impress the brothers. I thought being president of the NAACP at Brown would increase my status, and so I boasted about it to some of the frat's members.

Soon after, one of the fraternity brothers visited me in my dorm. He was sorry to tell me that I had been kicked out of the pledge class. He wouldn't say why exactly, just that some of the brothers didn't like "some of the things" I was doing. My mind fumbled trying to grasp how this could happen. Was it my involvement in the NAACP?

I wrote to my parents about my new position, expecting that they would be proud their son was doing something worthwhile at Brown. Separate letters from my father and mother arrived together. They were shocked that I had become involved in such an organization. Didn't I realize it might jeopardize my mother's real estate business if people found out? If I didn't immediately resign, they wrote, they would take me out of Brown. Without hesitation I wrote back saying I would resign. It was a lie, but to this day I have never felt any guilt about it.

As president, I went on to run more voter registration campaigns in the poor neighborhoods of Providence and raised money for the Student Nonviolent Coordinating Committee's voter project in the South. We joined with the UCA in making house repairs for low-income people in the inner city. We also started an elementary school tutorial program for minority students. It felt good to be responding to the NAACP's call to be a "champion of social justice."

In the spring of my sophomore year I was attending a fraternity party when I noticed an African American student drinking at the bar. As I was leaving at the end of the evening, I saw him sitting in a stupor in the hallway with a frat brother looking down and hurling racial slurs at him. He held a liquor bottle out to the black student, egging him on to drink more.

My stomach turned at the sight, but I did nothing to help the student. A thought surfaced in my head that I hated to admit. Whenever I encountered someone with black skin, I realized, even I—an avowed civil rights advocate—experienced a subtle internal flinch, as if I was bracing myself against a threat. I wasn't so different from other prejudiced people after all.

The truth about my own prejudice humbled me. Eventually, I realized this flaw was just part of who I was. My better half still thought he knew that this white student was worthy of being president of the NAACP.

Reader Responses to Lessons in Prejudice