Where does a Pulitzer Prize–winning playwright get her inspiration? If you're Lynn Nottage '86, you study your relatives. 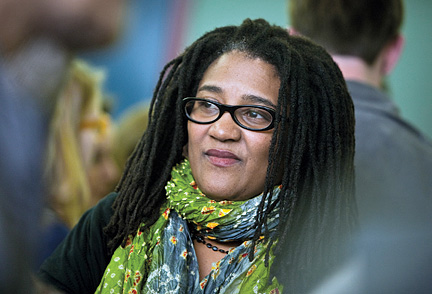 Scott Kingsley
Lynn Nottage: "The role of the theater artist is to keep her eyes open when everyone else's eyes are shut."

"I'm married to a Romanian Jewish man," Nottage, who is African American, said while on campus in April to give the Don Wilmeth Endowed Lectureship in the American Theatre. "I'm raising a biracial child and an African child adopted from Ethiopia.... My father-in-law is a gay man with a Mexican lover who is forty-three years his junior. My brother is a successful lawyer with shoulder-length dreadlocks, who is married to a working-class English woman who never went to college. And my sister-in-law is a clinically depressed psychologist who's married to a legally blind Vietnamese man who was raised by Christian missionaries."

Nottage said it is this heterogeneous background that's responsible for the varied subject matter of her plays. The 1995 Crumbs from the Table of Joy focuses on an African American man married to a white German woman in the 1950s. Intimate Apparel, which premiered in 2003, portrays an African American seamstress at the turn of the twentieth century. And Ruined, which won the 2009 Pulitzer for drama, deals with rape and survival in the present-day Congo; her research for the play also turned her into an international activist for women's rights. Yet Nottage defies characterization: her next play, she said, will be a comedy set in 1930s Hollywood.

"My experience is complicated and diverse," Nottage said, "and doesn't always adhere to traditional paradigms. As such, I want to create theater that explores the cultural tension of being an African American woman living in a multicultural society."

Nottage, who received a MacArthur genius award in 2007, grew up in Brooklyn, where, she said, her parents were "social activists in civil-servant drag" who imparted a rich sense of the hardship and suffering African Americans have endured. She called the "blues" influence on her work—"the soulful laments of my ancestors." But she also described the influence of hip-hop, the old-school music she heard as a teenager in the early 1980s.

Nottage described herself as a member of the "nexus" generation, with all her diverse influences coming together to create a "new aesthetic that embraces the complex wordplay and self-celebration of the blues, but is also assertive and irreverent and urban and contemporary and fast-paced braggadocio," like hip hop.

"The role of the theater artist is to keep her eyes open when everyone else's are shut," she said. "Theater helps us explore questions like how do we love, how do we go to war, how do we move through pain, how do we find happiness, how do we mourn, how do we heal."

Reader Responses to Playing Against Type