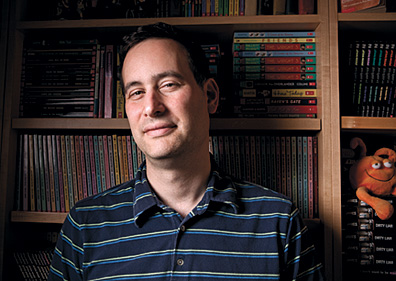 Jared Castaldi
David Levithan is a novelist only on the weekends; weekdays, he edits some of the best young-adult fiction out there.
Levithan and his coauthor, young-adult novelist John Green, wrote alternating chapters of the book, each channeling one of the Will Graysons. "We were both really fascinated by the notion of structuring a novel like an X," Levithan says. "We write them parallel to each other and then they cross, and then parallel again." The coauthors worked independently, agreeing in advance only when and where the two Wills would meet, Levithan says. The porn shop is that intersection, but you have to read the book to find out why.

The author of ten books, Levithan has coauthored other novels: he and Sarah Cohn wrote Naomi and Ely's No Kiss List and the best-selling Nick and Norah's Infinite Playlist, which was made into the award-winning 2008 film of the same name, starring Michael Cera. Their next collaboration, Dash and Lily's Book of Dares, is due out in October. The Lover's Dictionary, Levithan's first adult novel, will be published by Farrar, Strauss, and Giroux in January 2011.

Prolific though Levithan is, he writes only on the weekends. Weekdays, the boyish thirty-eight-year-old is an editorial director at Scholastic, where he acquires and edits young-adult novels that range from The Baby-Sitter's Club to a multimedia series called The 39 Clues. He founded the imprint Push to publish new voices in young-adult fiction.

"I think of myself as an editor first and a writer second," Levithan says. He began editing at the College Hill Independent—he was a double concentrator in political science and literature at Brown—and a summer internship at Scholastic hooked him on publishing teen fiction. "It is as attractive and mysterious to me to make somebody else write the best book they can as to write the best book I can myself," he says.

Levithan says he researches his books by talking with readers on book tours, hanging out on Facebook, and tapping into his own high school experience—which, he says, was "not very tortured." Many of Levithan's characters are gay (like him); most are happy and well-adjusted (also like him). His writing debut was the 2003 novel Boy Meets Boy, a whimsical love story set in a magical suburban high school where the quarterback is a drag queen and membership in PFLAG (Parents and Friends of Lesbians and Gays) rivals that of the PTA.

"So much of gay teen fiction at that point was about misery and death and being the outsider," Levithan says. "There was no room for happy gay kids. The book became what it was because of that."

Will Grayson, Will Grayson then, is a departure for Levithan, whose Will Grayson character is a brooding Goth who writes only in lowercase: "i am constantly torn between killing myself and killing everyone around me," he notes by way of introducing himself. Still, it doesn't take long for readers to peel away the black trench coat and see the humanity underneath. "Going on Facebook, you look at these kids' profiles, and they're all eye shadow and all anger," Levithan says. "And then it's like, Favorite Band: Christina Aguilera! Or they'll be like, 'I just want to fall in love.'"

John Green's Will Grayson has his own issues—his two rules are: 1. Shut up and 2. Don't care. He longs for anonymity. But his best friend is Tiny Cooper, "the world's largest person who is really, really gay, and also the world's gayest person who is really, really large." Tiny is writing and directing Tiny Dancer, the most fabulous autobiographical high school musical ever.

Levithan says the inspiration for Will Grayson, Will Grayson came from his experience at Brown, where he frequently was confused with David Leventhal '95, who is now a dancer with the Mark Morris Dance Group.

"I'd get his mail all the time," Levithan says with a laugh. After Leventhal danced in a campus production of West Side Story, Levithan said, "People would say to me, 'Oh my God, you seem so clumsy and oafish, but on stage you were beautiful!'" Similarly, students would compliment Leventhal on his Independent articles. When Levithan decided to do a collaborative book with another male author, the idea of two boys with the same name seemed perfect.

The two Davids didn't meet until just before Levithan's graduation, but they've been fast friends ever since. Levithan even dedicated his portion of the book to Leventhal. When Levithan called to tell him about Will Grayson, Will Grayson, Leventhal laughed. His roommate at Brown was named Jon Green.