No One Intimidates Campo

Longtime International Chess Federation President Florencio Campomanes, who died May 3 at age 83, may be best known for a match he halted: the 1984 contest between world champion Anatoly Karpov and challenger Garry Kasparov. 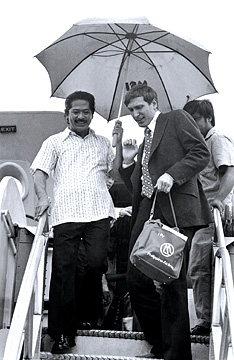 The first player to win six games would be declared world champion. Karpov took a quick 4–0 lead, winning four of the first nine games (the other five ended as draws), and eighteen games later went up 5–0. After a total of forty-six games—the previous record for a world championship match had been thirty-four—the score remained the same. Then Karpov, exhausted, began making mistakes. After Kasparov won games forty-seven and forty-eight, Campomanes ended the match with the score 5–3. Kasparov never forgave him; both he and Karpov wanted to play on.

Although both players were Soviets, Karpov was the Kremlin favorite, and some suspected that Campomanes had caved under political pressure to protect him. In a videotaped interview with the online magazine ChessBase in 2005, Campo said the choice to end the match was his alone. "The final decision, as a matter of fact, was made right there on the stage," he said. "I've made many decisions that way; I seek my inspiration for a decision right there on the spot, facing my audience, facing the people, facing the protagonists." He added, "No one intimidates Campo."

The repercussions were long lasting. Kasparov won the rematch, but he broke off from the International Chess Federation (best known by its French acronym, FIDE) and helped organize the rival Professional Chess Association. For the next thirteen years the chess world had two champions.

Campomanes who counted among his friends world chess champion Bobby Fischer and Philippine President Ferdinand Marcos was legendary for his political skills and his brinksmanship, both of which he used shrewdly in the service of chess. At the height of the Cold War, he decided to lead a Philippine team to its first Chess Olympiad in Moscow. His country had no diplomatic relations with the USSR, and the government refused to approve his team's diplomatic passports. The night before the team was scheduled to leave for Moscow, Campo and a fellow chess player, then vice president Carlos Garcia, went to the palace to see President Ram√≥n Magsaysay, who was dressed for bed. He signed off on the passports, and the team flew to Moscow the following day.

When Garcia succeeded Magsaysay as president, Campomanes became a regular at the palace. He later recalled that when the First Lady would announce that dinner was served, Garcia would frequently call out, "One more game."

Reader Responses to No One Intimidates Campo