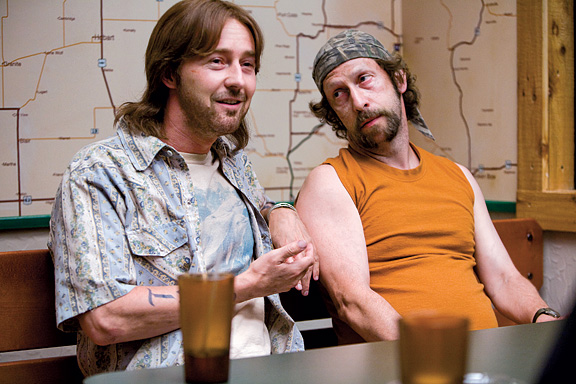 It figures that a student of philosophy—as Tim Blake Nelson was at Brown—would sow the seeds of a comedy in tragedy. His latest film, Leaves of Grass, is "about a guy who gets sideswiped in life," says the actor-writer-director.

It's something that Nelson, who is best known for his work as a character actor (O Brother, Where Art Thou?, The Incredible Hulk), knows a thing or two about. Leaves of Grass grew from the ashes of another film, Seasons of Dust, that lost its financing while he was directing it in Louisiana.

After that film imploded, Nelson returned to his family in New York City "utterly bereft," he says. But, he adds, "I didn't want to sit around and feel sorry for myself, so I wrote Leaves of Grass as a comedy."

The film, the fourth Nelson has directed (Eye of God, O, and The Grey Zone are the others), is about Bill Kincaid, a Brown philosophy professor who is drawn back home to Oklahoma by his estranged identical twin, Brady, a pot farmer (hence the movie's high-brow/low-brow title pun). The twins—Edward Norton plays both of them—are clearly an extension of Nelson, who was raised in Oklahoma and was a classics concentrator at Brown. 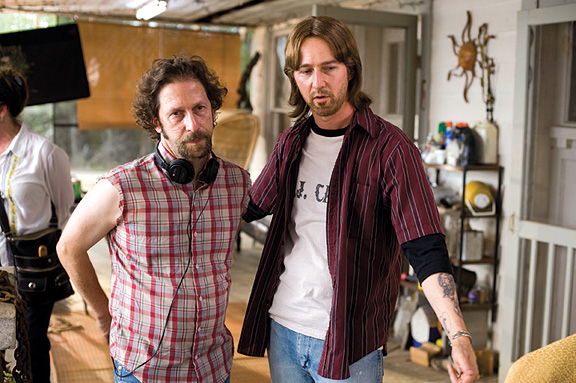 Nelson and Norton on the set.

Nelson says the muse for Leaves of Grass was former Brown philosophy professor Martha Nussbaum, with whom he took five classes. "Bill Kincaid is an extreme, male version of her," Nelson says. "She was my guiding light, but it should be pointed out that Martha is not at all as dispassionate a person as Bill is. She is quite the opposite." (Nussbaum, who is now on the University of Chicago faculty, consulted on the film, helping with dialogue, including a disquisition on Nietzsche.)

The philosophy discussed by the characters—one of whom is played by Lucy DeVito '05—plays out in gory, uproarious action as the straight-laced Kincaid gets knocked around by a hillbilly syndicate headed by a Jewish drug kingpin played by Richard Dreyfuss. (If this brings to mind the Coen brothers' movies, it's no accident: Nelson has collaborated with them in the past and says Fargo was also an inspiration. He consulted with the Coens while editing Leaves of Grass.)

Because it has had a limited theatrical release, you may have trouble finding Leaves of Grass at the movie theater this fall, but it has already been released on DVD. Nelson, meanwhile, is keeping busy: he is slated to appear in seven upcoming films and will also be a "lethal weapon" in an upcoming episode of the TV show Chaos.

Nelson largely credits his outlook to his time on College Hill. "Brown helped define the way I approach the world and try to tell stories," he explains. "How I approach problems, challenges, and opportunities is more dominated by my time there than by any other force in my life."

Reader Responses to Bear with Him