Designer Kevin Kramp knits voluminous men's garments out of gossamer mixes of yarns—silk and mohair, cashmere and lurex. The look is clearly not for everyone—his pantaloons have been compared to upscale Snuggies—but Kramp shrugs off the criticism. "Most people suffer from tunnel vision when they're exposed to unusual beauty," he says. 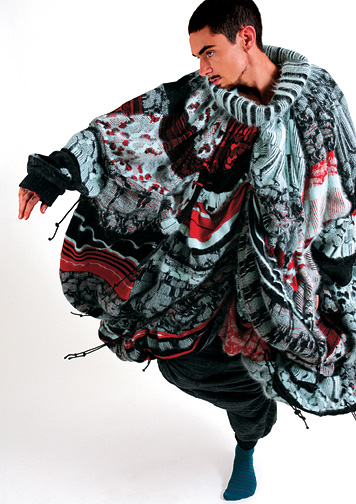 Courtesy Kevin Kramp
Kevin Kramp draws his inspiration from some unusual places, such as nomadic tribal cultures and historic figures.
Kramp's designs have captured the attention of the fashion world despite, or perhaps because of, their eccentricity. He's been interviewed in international fashion and textile magazines, and his knitwear is being exhibited in two shows over the next year. The Minnesota native received an emerging-artist grant last year from Minneapolis's Jerome Foundation, and this fall his work is on display at the city's Textile Center. His designs have been chosen for the young talent portion of a major international exhibition next March called "Unraveled" at the MoMu fashion museum in Antwerp, Belgium. Among the heavyweights in the show are Ottavio Missoni, Coco Chanel, and Elsa Schiaparelli.

At Brown, Kramp concentrated in visual arts and Italian studies and staged a fashion show at which friends modeled his torn and layered chiffon dresses on a makeshift catwalk in List Art Center. After graduation he enrolled at Pratt Institute in New York City and then embarked on the knitwear program at the acclaimed Central Saint Martins College of Art and Design, which is part of the University of the Arts London.

Kramp works luxury fibers by hand on multigauge knitting machines to create arresting combinations of texture and volume. It's labor-intensive, and assembling a new garment can take as long as ten months. He then choreographs his photo shoots to emphasize the fluid movement of the fabrics. 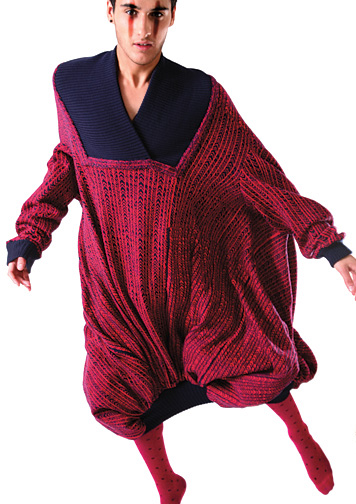 "It's the total image, total brand, total life," he says. "I think of myself as a creator of culture. I don't just make garments, I make [this] whole world."

Kramp does not expect to win over a broad audience, but he hopes to reach one that "gets" his very specific creative vision. "I think my work is stunning, and I want you to be stunned," he says. "That's the point of it. If people are going to learn and change, then you have to provoke them. They may not embrace my work, but I like to think I've nudged them a bit in that direction."

Students of fashion design may perceive the influence of avant-garde Japanese designers Rei Kawakubo, Yohji Yamamoto, and Issey Miyake in Kramp's work. However, he says he finds his inspiration elsewhere—in everything from nomadic tribal cultures to ancient historical figures. While it can be fun to watch another designer's fashion show, he says, "I find clothing to be the most uninspiring source of inspiration for more clothing."

Julie Iselin Turjoman is the author of Brave New Knits: Personalities and Projects From the Knitting Blogosphere.