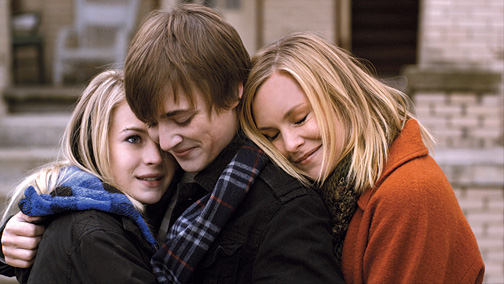 Sometimes fact is more touching than fiction. Jeff Fine '83 says the film Cherry, which he wrote and directed, is based loosely on his experience at Brown. Kyle Gallner, above, plays Aaron, a young and sheltered engineering whiz who is effectively driven from his Perkins Hall dorm room by his Don Juan-esque roommate. Aaron, meanwhile, is smitten with an older resumed-education student in his drawing class (played by Laura Miller, above right) but things get complicated when her fourteen-year-old daughter (Britt Robertson) falls for him. Although set at Brown, Cherry was shot at Kalamazoo College in Michigan. Despite its unfortunate title, it's a funny and ultimately moving story of a boy becoming a man on many levels.
What do you think?
See what other readers are saying about this article and add your voice.