"American Modernism: The Shein Collection," at the National Gallery of Art, Washington, D.C.; through January 2. 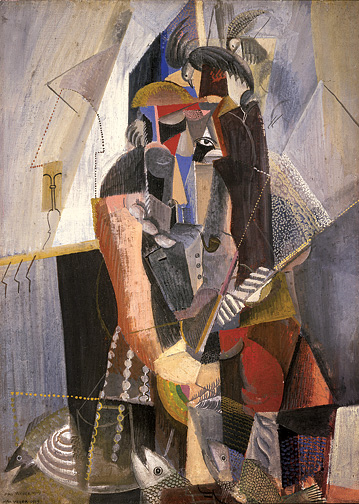 Courtesy Shein Collection
Max Weber's The Fishman was Ed Shein's first modernist purchase. It changed the direction of his collection. For additional images from the Shein collection, click here.

"Every painting tells a story," says Deborah Topol '74, discussing the collection that her husband, Ed Shein '66, has spent much of the last decade assembling. "And when they come together they tell a story about American art." (View a slideshow of some of Shein's collection here.)

A largely self-taught art collector and dealer, Ed Shein is on a mission to revise the history of American modernism. Helping is an exhibition at the National Gallery of Art called "American Modernist Art: The Shein Collection" and a book with the same name by curators Charles Brock and Nancy Anderson. More than 135,000 visitors have viewed the show since it opened last May.

For too long, Shein says, the influence of Stuart Davis, Arthur Dove, and other early American modernists has been overshadowed by the contributions of such European giants as Picasso and Leger. To revise that history, Shein has doggedly assembled a group of paintings that tell a more nuanced story of an artistic exchange that went back and forth across the Atlantic.

Shein and Topol are not your stereotypical art collectors. "We're relatively normal people," he says. "We don't belong to country clubs. We don't go on big vacations or eat out at fancy restaurants." Shein grew up on Providence's Camp Street, and his lawyer father, Ernest Shein '25, often bartered or gave away his services. As a child, Topol lived in Rome and trained her eye in a student job as a slide projectionist in Brown's art history department. A linguist, she spent most of her career teaching at the Rhode Island School for the Deaf.

Financial constrictions helped when it came to collecting art, Shein says. "My weakness was my greatest strength; I didn't have the money, so I couldn't afford to make a mistake." He read everything he could, researching old gallery catalogues, tracking down long-ago buyers and their heirs, all the while working with a small, trusted network of people who shared his passion.

Rigorously, he ranked the artists and each of their paintings. (A competitive tennis player since Brown, Shein says the habit of ranking is "in my DNA.") "I didn't want to buy a B picture ..." he starts, and Topol finishes for him "... just to have an example. A lot of collectors do that: they settle."

"A B-plus painting is very hard to sell," he adds. 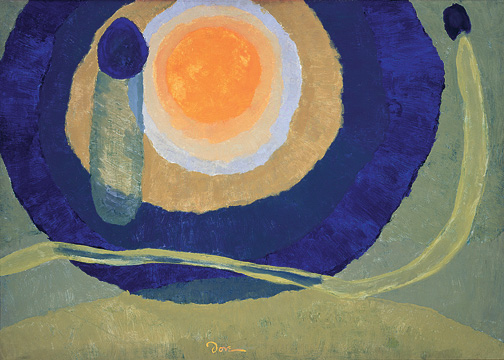 Shein and Topol plan to give thier collection, including Arthur Dove's Sunrise, to the National Gallery.

For most of his career, Shein focused on American impressionists. That changed with his purchase of The Fisherman (1916), by Max Weber, who provided the link between Alfred Steiglitz's Gallery 291 in New York City and the European modernists. The Webe rpainting overpowered the impressionist paintings in the couple's home and pushed the collection in a totally new direction. Shein drew up a list of artists he wanted to represent.

In 2000, he was able to purchase works by four of the top artists on that list: Charles Demuth, Georgia O'Keeffe, Arthur Dove, and Stuart Davis. By 2005 he had assembled a collection of twenty works by nineteen artists, including Marsden Hartley, John Marin, Alfred Maurer, and Charles Sheeler. In addition to these American-born artists, he included Frenchman Marcel Duchamp, who moved to New York in 1915, famously declaring America "the country of the art of the future."

This September, as Shein and Topol gave a tour of their house in Seekonk, Massachusetts, they pointed out the locations where the paintings in the collection normally hang—spots now occupied by a powerful series of equally modernist Rockwell Kent landscapes. "I've always been for the underdog," Shein says with a hint of his missionary zeal. "I would like to see Rockwell Kent get his due."

Shein and Topol have already given the National Gallery three works from their collection: Duchamp's Fresh Widow, John Marin's The Written Sea, and John Storrs's Auto Tower, Industrial Forms. Over time, they plan to donate the entire collection.

"For me," Ed Shein says, "art was my way of getting to a higher ground. All a collector is is a caretaker."

Reader Responses to The Caretaker