One of the often-overlooked truths about Brown athletes is the role academics plays in recruiting them. Take Bianca Aboubakare. Presented with the opportunity to play tennis at Arizona State or Texas A&M, she took the long view and chose to become a Bear. Those other schools may have given her a more prominent collegiate sports career, Aboubakare knew, but to ensure success during the decades after college, she figured Brown was the better choice. 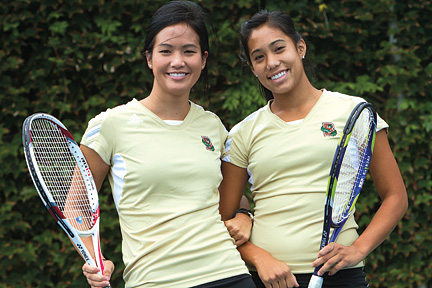 Scott Kingsley
Carissa (left) and Bianca Aboubakare formed such a formidable doubles team that the coach split them up to create two winning teams.
"I came here because of the great academics," she says. "There is life after tennis. I wanted to go somewhere that would open doors for me."

Aboubakare is now on pace to break nearly every women's tennis record at Brown this season. A three-time first-team All-Ivy selection, she enters her senior season with 138 career victories, just two shy of the 140 mark set by Saranga Sangakkara '99.

"What is amazing about that is that we got a player with infectious enthusiasm who also can back it up on the court, and is typically our best-conditioned athlete, and has been somebody that loves Brown," says head coach Paul Wardlaw. "She is the first five-star player to come to Brown in a number of years."

No wonder Aboubakare has become the poster child for rebuilding women's tennis at Brown. Among the standout players Wardlaw has been able to recruit in recent years is Aboubakare's sister, Carissa, who was at first intending to go to the U.S. Air Force Academy. However, when she dropped Bianca off for her freshman year and got a taste of campus life, she realized Brown was the place for her. "The environment here is really unique," she says, "and you aren't going to find it anywhere else." Carissa's recruiting class included four five-star players, and Brown's recruiting classes since that time have regularly been ranked in the top twenty-five nationally.

Like the two more famous tennis sisters Venus and Serena Williams, the Aboubakares grew up playing on public courts and were taught by their father. Also like the Williamses, the Aboubakares have a bit of sibling rivalry going on the court. "It was tough when we were younger," Carissa says.

Bianca, who both agree is the more competitive of the two, has won 80 percent of the matches the sisters have played against each other. "We always pushed each other, whether we were conscious of it or not," Carissa says.

The two put their individual rivalry aside to play doubles, however, and became one of the top doubles teams in the country. "Our games are completely different, and we really complement each other." Carissa says. During Carissa's freshman year, the two women teamed up frequently in doubles and dominated the competition. Bianca ended the season with twenty-four doubles victories, while Carissa earned twenty-two, the fourth and fifth highest single-season totals in Brown women's tennis history.

That spring, Wardlaw thought it might be better to separate the tandem to spread their ability over two doubles teams rather than one. The strategy worked, as the Bears often captured the top two doubles matches to earn the doubles point in most of their spring tournaments.

Unfortunately, Carissa's collegiate career has been slowed by injuries since her sophomore season. "I got injured in October 2009," she says, "and from October until December they were just trying to figure out what was going on with me because I had all of these strange neurological symptoms. At one point, I lost sense of touch in half of my body."

Finally, after she returned home in December, her doctor diagnosed a torn hip labrum. She had surgery the following June and is now rehabbing her way back to the team. Her goal is to continue to work through the fall and winter to prepare herself for the Ivy League season in the spring.

While Carissa is working to get back, Bianca is trying to lead the Bears to an Ivy title and an NCAA Tournament berth. "We definitely want to win Ivies," Bianca says, "and I think there is a great possibility to do that and go on to the national championship. We have a really great squad this year."

"There is so much depth," Carissa adds, "and the freshmen are exceptional. It is nice to see all of the pieces falling into place."

Princeton, Harvard, and Yale will once again pose the biggest threat. Even if the Bears don't win the Ivy crown, there is still a chance that two or even three teams from the league will make it to the NCAA Tournament.

Off the court, Bianca is a human-biology concentrator, and hopes eventually to attend medical school. She has applied to Teach for America, and if accepted she'll spend the next two years teaching.

Carissa, meanwhile, is a cognitive-neuroscience concentrator and plans to take a year off after graduation either to conduct clinical research or to volunteer in India or Costa Rica before attending medical school.

Right now, however, these two future doctor-sisters are concentrating their act on dominating the Ivy League tennis circuit for one more season.