One night Justin Metcalfe ’95 was playing poker when a friend told him, "You know what you should do? You should make doorknobs." 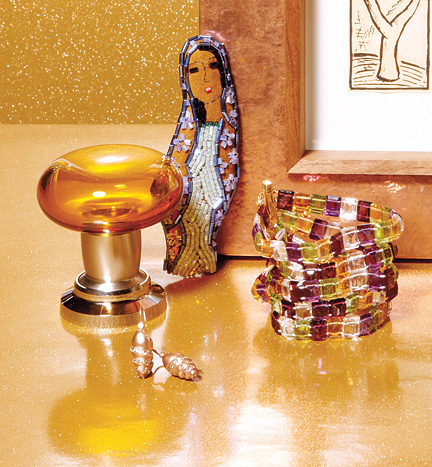 At the time, Metcalfe was working in a group home for mentally ill adults. In his spare time he'd been turning shift knobs for cars on a lathe, because he thought it would be cool to own one. He was also wondering what he was doing with his life.

That's when the doorknob idea came up. There had to be more demand for doorknobs than for fancy gearshifts, so he figured he'd give it a try. After "an embarrassing learning period" turning wooden knobs on a lathe in his barn, Metcalfe says he homed in on a look. Now he makes his living making doorknobs. And not just any doorknobs: his company, Knobworks Vermont, handcrafts hefty knobs of wood, brass, and blown glass. Knobs and rosettes run from $150 to $250.

Assisted by a machinist, Metcalfe mills and turns all his wood and metal knobs. "Die-casting always seemed cheap to me," he says. For glass doorknobs, he relies on glass blowers to make both solid and hollow knobs in a range of colors and styles. Metcalfe is particularly fond of old-fashioned mirrored-glass knobs.

"It's the beauty of a handmade thing," he says. "You line up fifty glass doorknobs, and they all look alike, but each one feels awesome in its own way. That's the kind of thing that gives a product its own soul."

Metcalfe says he's humbled by the talent of the artisans he's added to his shop. "All I do is draw stuff up on a computer," he says. "I'm not an artist; I just have a basic aesthetic sense. I'm perseverative; it's really that simple.

Reader Responses to A Little Insane