"I think it's hereditary," says Julia Berger ’91 of her passion fortextiles. Her mother, who is Japanese, loves silks and indigo cottons.Living in Tokyo and San Francisco, the family traveled a lot, and,Berger says, "As a child, I wouldn't buy keepsakes. I'd buy fabric."Now she has translated that fervor into a line of fine bed- andtable-linens with vintage-inspired monograms. 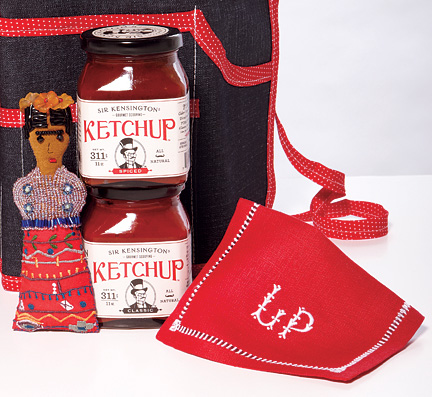 Berger trained her eye and hand while on leave from Brownto study textile design in Florence. She jokes that she failed Italianat Brown but became fluent when forced to speak it daily. Herproficiency in both Japanese and Italian (she speaks five languages)provided an entr√© to the world of fashion, where she helped DonnaKaran and Calvin Klein develop their Japanese markets.

In 1999, Berger went back to her love of textiles to create hercompany, Julia B. She sold through decorators and ran a shop inGreenwich, Connecticut, catering "to a hedge-fund clientele," she says.Then the economy tanked.

So Berger revised her business plan. Julia B. still buys cotton fromItaly and linen from Ireland and Belgium, but its IT work is done inIndia, and the needlework is now done in Vietnam and Madagascar, where,Berger says, French colonialism left a legacy of skilled embroiderers."We do all of our work by hand. This is not 5,000 pieces being made ina sweatshop." Employees pick up their work and stitch it at home, attheir convenience, she says, adding "We pay very well."

Julia B. now sells through its web site, www.juliab.com, where picking fabric, colors, and monogram styles from dozens ofoptions is easy. The company can also replicate old family linens orcustom-design products to fit a given room. Berger also plans todistribute her wares through about forty select retailers around theworld. And she's meeting with prominent interior designers to discussmanufacturing a private line.