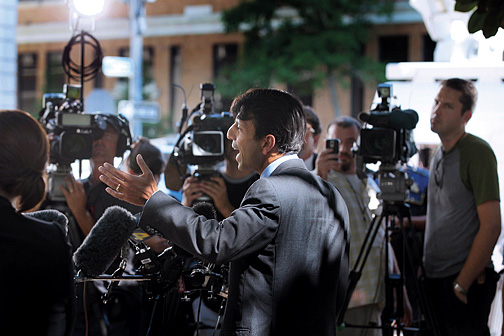 If you don't follow U.S. politics closely, you may remember Bobby Jindal as something of a one-hit wonder. The Louisiana governor briefly caught pundits' attention a few years ago as a potential Republican counterpoint to President Barack Obama, only to wind up the butt of late-night jokes after his nationally televised response to the president's first congressional address went painfully awry.

Jindal has not scaled back his ambitions, however. Although he insists he has the job he wants and has ruled out a 2012 presidential run, he's spent the two years since that disastrous 2009 speech quietly networking with movement conservatives and Republican power brokers around the country. The latest sign that he's angling for something—a vice presidential nod is one theory, or perhaps a future presidential run —is that he's released a new political manifesto, Leadership and Crisis, published by Regnery Publishing.

The book offers a window into what one ambitious politician and his advisers think he needs to say—and who he thinks he needs to be—to position himself for the future that, despite his protestations, he obviously wants. But if identity creation is the book's mission, it's also its central problem. Two Jindals are evident in Leadership and Crisis, or one politician trying to do two very different things: carve out a niche as a kinder, gentler, more thoughtful Republican, and match his potential rivals' appeal to the party's right-wing base talking point by talking point. Rather than melding into a coherent whole, these competing instincts lie uneasily beside each other on the page, often in dizzying juxtaposition.

There's the Jindal of the volume's action-oriented title, the one who was elected in 2007 in a wave of buyers' remorse after the woman who beat him in the governor's race four years earlier, Democrat Kathleen Blanco, struggled to deal with the aftermath of Hurricane Katrina. Jindal learned from his predecessor's mistakes and drew high marks from his constituents for his surefooted handling of Hurricane Gustav in 2008. He emerged again as a forceful governor during last year's BP oil spill.

This Jindal is a detail-oriented policy wonk, a Brown biology major and Rhodes Scholar who became Louisiana's health secretary at age twenty-four, and who then held a series of high-level state and federal posts before coasting to victory in two races, one for the U.S. Congress and later, at the age of thirty-six, one for governor. This Jindal is a can-do and often bipartisan pragmatist who can score jacket blurbs not just from Newt Gingrich but also from Democratic firebrand James Carville.

Then there's the newer Jindal, who has his finger to GOP winds and who knows that, to succeed nationally with his party these days, he has to keep up with the Palins and the Pawlentys. This is Jindal the ideologue, who tends to treat complex matters simplistically and to launch strident attacks. This Jindal is a culture warrior who extols the wisdom of regular folks and rails against big government, political correctness, and such know-it-all elites and experts as—well, him.

Unfortunately, in terms of overall tone, the latter Jindal dominates Leadership and Crisis. Take his brief description of his time at Brown. As a political columnist for the New Orleans Times-Picayune who has watched him for the last eight years, I know that in person Jindal, a former Brown trustee, speaks fondly of his years on campus, of his professors, and of how much he enjoyed the intellectual exercise of defending his views to more liberal classmates. 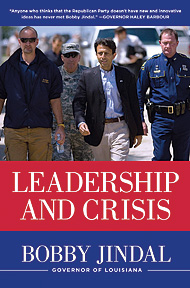 In the book, though, Brown becomes a one-dimensional p.c. foil to the virtues of down-to-earth Louisiana. In which of these two places, for example, did this defiantly unhyphenated son of Indian immigrants, this nerdy Hindu-turned-evangelical-Catholic, feel more out of place? Why, Brown, of course. In Leadership and Crisis he writes of a student adviser who warned that he was causing offense "because, as she said, 'You're holding the doors for the female students. And you need to call them women, not ladies or girls.' (Actually she would spell it womyn because to spell the word women would be sexist, too.)"

Similarly, he reports that he boycotted a mandatory orientation program "in which, in the name of tolerance, straight men were asked to take on the identity of gay men." He tells of rejecting an invitation by fellow student and now activist filmmaker Rory Kennedy '91—yes, one of those Kennedys—to protest "grapes," or, as he later found out, farmworker conditions. Jindal does allow, though, that holding "incredibly unpopular" ideas carried a bit of a silver lining: "I realized that my own beliefs were conservative, and Brown forced me to think about why I was a conservative."

Even the more policy-oriented sections employ similar language. Jindal includes a laundry list of conservative agenda items, including school choice, health care, energy policy, immigration, and Obama's flubbed management of the BP spill. One chapter is titled "Do we really want to be like Europe?" Jindal's answer to that question, of course, is a resounding no—actually more of a resounding no, but. He argues that European-style social-welfare states sap people of personal responsibility, then adds: "Don't get me wrong. I believe in some safety nets."

On one whiplash-inducing page, Jindal acknowledges that "global warming may in fact be a significant problem for mankind," and endorses efforts to "harness science and technology to raise efficiency, increase conservation, and reduce our emissions." Then, as if remembering Republican orthodoxy on the issue, he adds: "Overall these doomsday scenarios are not fact, they're conjecture presented with a bizarre religious fervor. Skeptics of the scenarios are shrilly denounced as modern-day heretics. I for one am not going to be intimidated by this." And he keeps going. "Global warming alarmism," he continues, "is often used to further extremist political agendas that are opposed to capitalism, in favor of population control, and even represent a sort of anti-technology Luddism. What all these agendas have in common is an effort to increase government control over the individual."

The irony to his approach is that Jindal is actually a much more effective politician when he drops the rhetorical bluster. His impressive rise in Louisiana politics was fueled by an ability to connect with all sorts of people, from editorial writers to regular voters; to espouse certain principles but treat those who don't share them respectfully; and to project technical competence, sunny optimism, and self-deprecating good humor all at the same time.

That was then. The nation hasn't seen much of that Jindal lately, and readers of this book will catch only the occasional glimpse. That's too bad, because he comes across as most genuine in those moments. When describing in Leadership and Crisis the spiritual quest that ultimately led him to his teenage conversion, for example, Jindal wryly acknowledges the ambition he's apparently always worn on his sleeve. While trying to learn all he could about his adopted faith, Jindal says he asked a Catholic layperson how the Pope gets elected. "Bobby," this adviser responded, "don't become Catholic because you think you're going to be Pope."

"Perhaps," Jindal concludes, "He knew me too well."

Stephanie Grace is a political columnist for the New Orleans Times-Picayune.