A Kind of Fame

My Brown classmate Marcia (Taylor) Fowle and I had the gift of an extraordinary nine months in Europe following graduation. One day, while traveling from hostel to hostel in our Renault Dauphine, we made a pit stop in the hills of rural Italy for a bathroom break. The restroom in the village consisted of two stalls separated by a sheet of canvas. Each latrine was little more than a hole in the floor: simple, for sure, and adequate for our needs. 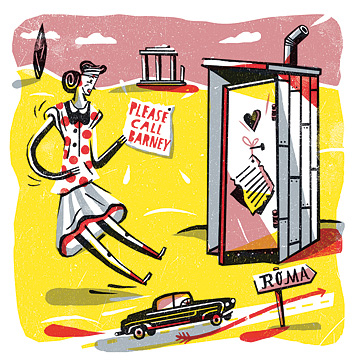 "The toilet paper is a page from a phone book," I called gleefully over to Marcia in the next stall. The harsh pages, torn into quarters, were strung on baling twine. I examined the paper scraps more carefully. "The phone book is from Providence, Rhode Island!" I shouted. It was indeed. And in my hand was the entry for Barnaby Keeney, Brown's president.

As an active undergraduate, I had known Barney (as he was known) well enough that I could share my surprise with him. I wrote a note, enclosing the page fragment, which I saved. "You'll be surprised to know that this scrap from the Providence phone book was provided me for toilet paper in a restroom high in the hills of Italy." I knew he would be amused.

The trip went on, and the episode faded into memory, until a gesture by President Keeney brought it back. As the return address for my note to him, I must have written our next American Express stop. Imagine my surprise at stopping there and finding in my mail a letter from the Office of the President, Brown University. "It would not have occurred to me that my fame had spread so far and wide," wrote Barney.

It was a Brown moment I'll never forget.

Marie (O'Donahoe) Kirn is a retired hospice administrator who lives in Hartland, Vermont.

Reader Responses to A Kind of Fame