How to Talk to Your Dog

Michele Wan is the study coordinator for the Columbia University Studies on Dog-Human Communication. She is based in Westport, Connecticut. 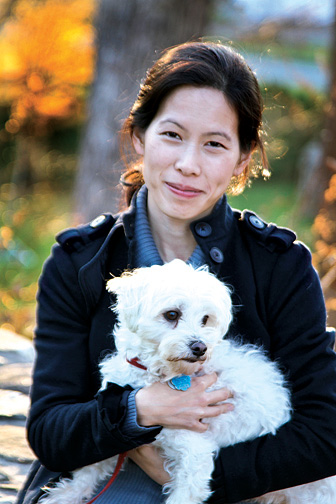 Wan recommends carrying on a conversation with your dog by reading its body language.

BAM What's the biggest mistake that humans make with their dogs?

Wan One of the biggest problems I see is that people don't know how to read their dog's body language. When you interact with your dog, it should be a conversation. Even though dogs don't speak verbally, they do bark, they do vocalize, but more often what they communicate is more subtle, with their ears, their tail, their posture, for example. A lot of time people don't realize communication is going on.

BAM What's the best way to establish a pattern or a command for a dog: repetition or reward?

Wan It's both. If you want to teach a dog to sit, you could push his rump to the ground. But is he learning to sit on his own? No, he's learning that, when you say sit, you will push his rump to the ground. In the past it was more popular to use choke chains and prong collars and to be more physically coercive in terms of making a dog do something you would want him to do. More modern methods use positive reinforcement to get the behavior that you want.

BAM When you ask a dog to sit, and the dog sits, does it understand the meaning of words as well as tone?

Wan Meaning of words is a bit of a loaded question in the animal cognition world because people have debated for centuries whether animals can use language. When you say sit to a dog and he obeys, we can't say that he understands what the word sit means in the same way that we do. Some dogs have been trained to read words, but they recognize the shape of the word as a request for them to do one thing or another.

BAM Why do dogs love playing fetch and tug-of-war?

Wan It actually depends on the dog. I guess your prototypical fetching dog is a Lab. Labs are bred to have a working relationship with humans, so over the course of many generations breeders have looked for a fetching behavior. And of course you have to think about if somebody is getting a Lab, they might be the type of owner that likes to throw a ball, and that's why they choose the Lab.

Wan There is a consensus that they feel basic emotions like happiness and fear, but there is a debate over whether they feel secondary emotions like guilt or jealousy, and I think loneliness would fall into that category. I would feel comfortable saying that what they can be expressing when they're alone is fear and anxiety. They do have pretty advanced social skills for animals—some more advanced than those of nonhuman primates, like chimps. They follow pointing gestures. Looking us in the eye, seeking our attention—that's really special animal behavior.

Wan It can be a good thing or it can be a bad thing. I don't have a problem with someone considering their dog like their child as long as people are providing their dogs with what they need—as long as they're comfortable, as long as they're getting exercised and socialized. Some people do go overboard. If your dog is perfectly healthy and he can walk, and you push him around in a baby carriage, that's not good for the dog.

Reader Responses to How to Talk to Your Dog