This is a story about how two freshman dorm-mates with very different careers ended up living in trailers in Iraq almost twenty years later. 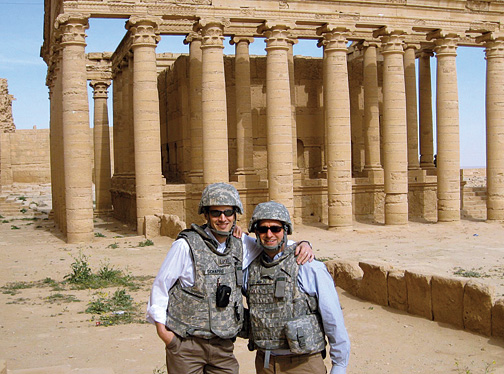 Courtesy Mark Schapiro
Mark Schapiro (left) and Matt Meyers at the ruins of ancient Hatra about 200 miles north of Baghdad.

Mark Schapiro's career in the U.S. Foreign Service began with a decision he made junior year. The New York City native, who was already fluent in French and Italian, wanted to learn a third language. The choice was between Chinese or Arabic, but Chinese class met six days a week.

"I made the decision to protect my weekends in college," Schapiro ’94 says. "I said, 'There's no way I'm going to class on Saturday.'" And so began the preparation for the life of a diplomat who's been posted all across the Middle East.

Matt Meyer ’94, Schapiro's friend and freshman-year dorm-mate at Mead House in Keeney Quad, headed to Nairobi after graduation from Brown to start a company called Ecosandals, which made footwear from second-hand materials. He then came back to the United States to earn a law degree and eventually started hammering out investment deals on Wall Street.

Schapiro arrived in Baghdad in February 2004 to work in the press office of Ambassador L. Paul Bremer. Five years later he was put in charge of the Economic and Agriculture Section of the United States Ninewa Provincial Reconstruction Team based in the northern city of Mosul.

That's when Schapiro remembered his old friend Meyer. Searching for a senior economic adviser, he knew Meyer as someone fast on his feet whose experience finagling deals in both Kenya and New York would be a valuable asset in dealing with the intricacies of the Iraqi business world.

For his part, Meyer says he was thrilled and relieved when he got the call from Schapiro. "This was a new challenge, to use the talents I learned on Wall Street to serve my country," he says. 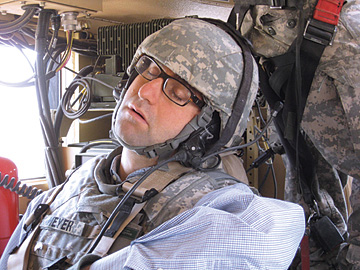 Meyers catches some zzz's inside an armored vehicle.

Until mid 2010, when Schapiro was reassigned to France, the two oversaw the civilian and military development efforts that the U.S. government was funding in Ninewa province. "All these years [after living in our freshman dorm at Brown], we were living in trailers fifteen feet away from each other again," Meyer says. "We ate in a big cafeteria. Even the beds were about the same size" as the beds in their old dorm.

Schapiro and Meyer traveled alongside U.S. troops throughout the province, often into dangerous areas. Neither of them was ever hurt, but they witnessed attacks on American soldiers. "It's not a day at the beach," Schapiro says, adding that they met some resistance from Iraqis. Angry farmers complained that the U.S. military had damaged their land. Iraqi bankers didn't want to be ordered to dispense loans to local contractors.

Meyer finished his tour in Iraq in January, and was considering whether to extend his stay or resume his Wall Street career. Schapiro is the U.S. Consul in Lyon, France. He doesn't know if he'll be in Iraq again.

"I've left the country in the past thinking maybe I'd never see it again," he says. "So I never say never."