After earning his General Education Diploma in 1990 at the age of twenty-eight, Hassan Brown found himself working mostly at odd jobs. A Providence resident, he labored as a landscaper and construction worker, sometimes accepting his wages under the table. Anything to get by. When he tried to join the Rhode Island Building and Construction Trades Council, the construction workers' union, Hassan faced a Catch-22: he needed more experience to get in, but he couldn't get it unless he was a union member. 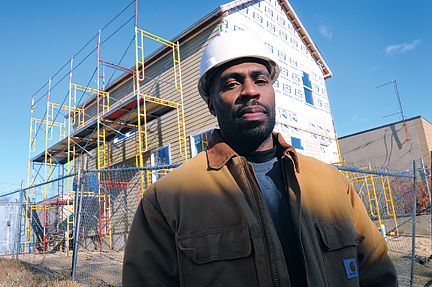 In late 2007, he signed up for a new program called Building Futures, which was started to help low-income workers move into the construction industry. A joint effort by the Providence Plan, YouthBuild Providence, and BuildRI, Building Futures has by now put dozens of workers into apprenticeships at construction sites around the city.

Brown—the university, not the worker—has participated since 2008, signing nonbinding memorandums of understanding with contractors who pledge to hire Building Futures trainees to complete at least 15 percent of the total work hours on any given project. This commitment to involve Building Futures workers has made Brown one of the state's biggest participants in the program.

According to Paul Dietel, the director of project management in the University's facilities management department, more than thirty Building Futures trainees have worked at Brown on a total of seven different projects both on College Hill and in the downtown Jewelry District. "This is a way Brown can give back to the community," says Dietel. "Brown has really been one of the leaders in making the program successful."

Hassan Brown started out working on the renovation of the J. Walter Wilson building, which was converted from science labs into offices and seminar rooms. He worked as an apprentice on demolition, which largely meant knocking down structures and then gathering up debris and hauling it to dumpsters. He was rehired last year, when he worked as a laborer apprentice on the Stephen Robert '62 Campus Center in Faunce House.

"I learned a little bit of everything," he says, including the use of saw tools and nail guns, and the installation of sheet rock: "the basics," Brown says. He adds that he also picked up more knowledge of the construction business, "from the jobs to the people." All told, the gig lasted six months. He earned $23 an hour. "They say if you get six months of work," Brown says, "it's a good year."

Brown worked most recently on the $45 million renovation of a Jewelry District building into the new headquarters of the Warren Alpert Medical School. He says he'd like to find a full-time job at the University, but is looking more widely as well.

"I try to look at Building Futures as a stepping stone to something else," he says. "I don't ever want to pigeonhole myself on being just a laborer apprentice. There are still other things I want to learn."

Reader Responses to Hands on Learning