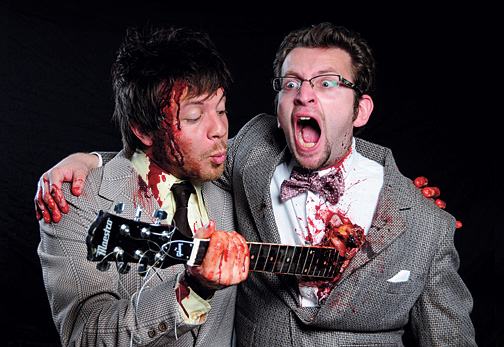 Vince Gonzales
Jerome Sable and Eli Batalion have the guts to produce a horror musical.
Remember those scary stories your scoutmaster told around the campfire? What if they roused a real monster? That's the premise of The Legend of Beaver Dam, a twelve-minute-long heavy-metal horror musical by Jerome Sable '02, left, and Eli Batalion '02, which was shown in a series of midnight screenings at this winter's Sundance Film Festival. In the movie a group of campers is entertained by a sadistic scoutmaster, who awakens the spirit of an evil monster named Stumpy Sam. Only nerdy Danny Zigwitz has the guts to gore the ghoul and get the girl. Sable and Batalion's last genre-bender was J.O.B. The Hip-Hopera, which Daily Variety declared "one of the best shows L.A. has seen in many years."
What do you think?
See what other readers are saying about this article and add your voice.