The seven-year Boldly Brown campaign has taken "boldly" to a whole new level. December 30 marked the official end of the Campaign for Academic Enrichment, nineteen months after exceeding its $1.4 billion target. After the final gifts were tallied in January, the news was better still: Brown had raised a record $1.61 billion, 115 percent of its goal, during one of the worst economic climates in recent history. 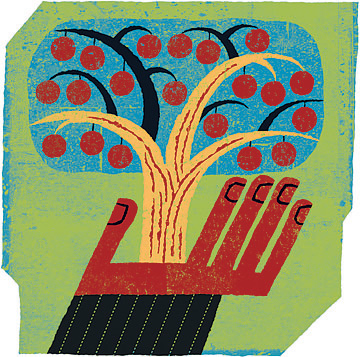 But numbers are just part of the story. "We've raised people's sights not just in financial terms—which clearly we've done—but in terms of institutional expectations and aspirations," says Matt Mallow '64, who cochaired the campaign with Liz Chace '59 and Jerome Vascellaro '74.

Already all that money has radically changed Brown, Mallow emphasizes. The $311 million raised for undergraduate financial aid made it possible for Brown to switch to need-blind admission, which in turn has attracted a more socioeconomically diverse student body. In fact, applications are so high that Brown now accepts only 8 or 9 percent of undergrad applicants. At the same time, larger graduate stipends are attracting more and better grad students, and the faculty has grown 20 percent—from 570 in 2003 to 682 today.

Thanks to the campaign, Brown has also built new buildings and rehabbed old ones. The Stephen Robert '62 Campus Center, the Perry and Marty Granoff Center for the Creative Arts, the medical school expansion in downtown Providence, and the new aquatics and fitness center currently under construction are just some of the projects the campaign made possible.

"We've created new academic centers," Mallow continues. "About 1,200 students are now enrolled in freshman seminars. And Warren Alpert's $100 million endowment for the medical school is absolutely transformative. On every front across the entire range of things that make this place hum, we have stepped up the level dramatically."

Boldly Brown raised more money than any previous fund-raising drive at the University, three times more than the previous mark of $534 million set by the Campaign for the Rising Generation in 1996. Over the past seven years, more than 69,000 people contributed to the Campaign for Academic Enrichment—about 70 percent of the Brown community, 36 percent of them first-time donors.

Of course, the campaign had the good fortune to receive two unexpected $100 million gifts, one from Sidney Frank '42 and one from local entrepreneur Warren Alpert. But Vascellaro stresses that the key to attracting all donations, large and small, was President Simmons's strategic plan for Brown's future, the Plan for Academic Enrichment: "The Plan was what got people on board. The campaign was in support of the Plan. No one deviated from that."

After serving lengthy terms on the Brown Corporation, both Chace and Mallow are retiring this spring, and they seemed ebullient about ending their involvement on such a high note. "We have set the foundation for the twenty-first century at Brown," Mallow says. "We've set it very firmly. We are handing off to the next generation a far stronger institution than the one that was handed off to us. We've done what I think is every generation's obligation, which is to take the University's strength, build upon it, and pass it on."

Vascellaro stresses that the end of the campaign does not mean the end of what Brown can still raise from an energized community. "I don't see any reason why we can't raise $200 million a year for the next ten years," he says.

Chace agrees. "I don't think we should lose the momentum," she says. "It's imperative that we keep the volunteers engaged."

Reader Responses to Reshaping the U.