Christopher Hayes '01 once wrote that his job as the Washington, D.C., editor of the Nation is "watching Rome burn very slowly." But there are times when he's tempted to drop the last two words from that sentence. 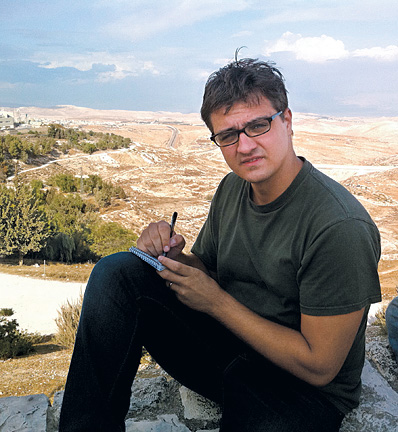 Courtesy Chris Hayes
Hayes takes notes atop a hill in Jerusalem overlooking the West Bank.
"It's almost impossible for me to conceive of a job I could love more than the one I have," Hayes says of working at the magazine that describes itself as "the flagship of the left." "But Washington is difficult and grueling and reliably disappointing. Sometimes it does get to you. There's a radical disjuncture between the incredibly fast pace of the news cycle versus how slowly progress moves, and there is suffering in the gap between those."

Fortunately, as a die-hard Cubs fan ("There are many psychological similarities between the American left and Cubs fans," he sighs) and a scion of a politically active progressive household in New York City, Hayes has just the right background and temperament for the job. At 13, he worked as a volunteer at the 1992 Democratic convention at which Bill Clinton was nominated.

At Brown, Hayes concentrated in philosophy, although he says he actually put more energy into theater than politics during his undergraduate years. Still, philosophy turned out to be the ideal preparation for a journalism career. "It was a tremendous education in rigorous critical thinking and how to tease out the boundaries of a concept," Hayes says. "That's not necessarily done enough in political discourse, where terms get thrown around without anyone investing much thought into what they mean."

Since becoming the Nation's Washington editor in 2007, Hayes has become a familiar figure on the left-leaning end of the media spectrum, turning up frequently on MSNBC, for example. He also tweets compulsively, podcasts, and writes columns and features. Somewhere in there he's also finding the time to write a book about the crisis of authority in American life; it's due out next year.

"A danger of Washington is that you don't want your ratio of input to output to fall too low," he says. "You want to be opining, writing, and producing less than you're taking in. Washington affords so many opportunities to opine across various platforms that you can let that ratio fall dangerously close to one-to-one—or even below, which is very bad because then you're opining more than you're learning."

Hayes figures he's "written far too much to ever be elected to anything," so he doesn't expect to cross the line from reporter to politician. But it's something he wrestles with, because political journalism has become as partisan and highly charged as politics.

"I do consider myself a journalist and also part of the progressive movement," he says. "The magazine exists in a space that's explicitly ideological and opinionated, so people know what side I'm on."

David Menconi is a writer in Raleigh, North Carolina.