As Brown's newest building, the Perry and Marty Granoff Center for the Creative Arts, neared completion this winter, what seemed to spark the public imagination most were the gray zinc panels along its sides. The Granoff Center sits between Angell and Olive streets, on the site of a former Shell station. Bracketed by the two Victorian manses that house the history department and the utilitarian box that is the Brown Office Building, the Granoff Center stands out like an exclamation point. The futuristic metal siding on its sides is horizontally pleated and cinched at the ends, like blinds partially raised to expose the goings-on inside. Quoted in the Boston Globe, one of the architects—from the New York City–based firm Diller Scofidio + Renfro—likened the effect to that of a woman lifting the hem of her skirt. Visual arts professor Richard Fishman says he and his colleagues see theater curtains about to open. 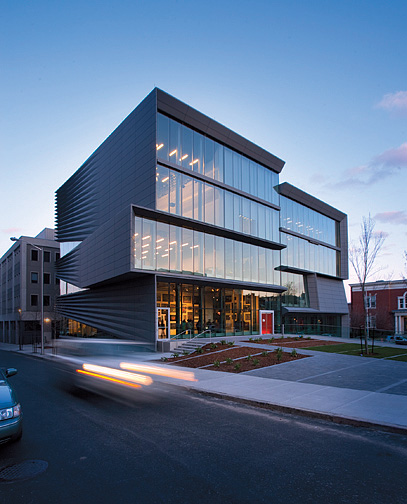 Erik Gould
The building’s pleated zinc sides face Olive and Angell streets, and the glass façade opens onto the Campus Walk, allowing passersby to see into the gallery and auditorium at ground level, and into the studios upstairs.
The common denominator to all those metaphors, says Fishman, who spearheaded the building's construction as director of Brown's Creative Arts Council, is a sense of exposure, consistent with the design's intention "to expose the art process." Diller Scofidio + Renfro is as well known for its architectural theories as for such high-concept buildings as Boston's Institute of Contemporary Art, and Fishman explains that their design captured Brown's thinking from the outset.

While those zinc zigzags give mere glimpses of studios within, the building's fa√ßade, which faces the Campus Walk, is a wall of glass that reveals three stories of loft-like studios. The building has been sliced down the middle from top to bottom, as if someone had taken a knife to it, and the right side has been dropped half a floor into the ground. That's where theory meets reality. Inside the building a glass wall separates the two halves, so students and faculty working on one can see what's happening in neighboring spaces a half-flight up or down.

During a tour of the building shortly after it opened in February, Fishman talked about its pedagogic roots, which, unsurprisingly, grew out of Brown's educational philosophy. In a way, he said, it's the physical incarnation of a course he taught in 1970, when the open curriculum, then known as the New Curriculum, encouraged faculty to create Modes of Thought classes designed to introduce freshmen and sophomores to multiple ways of thinking about a common theme. Fishman, a sculptor, teamed up with biologist Peter Stewart and mathematician Thomas Banchoff on Growth and Form in Mathematics, Biology, and Art, a course that examined such biological shapes as shells, skulls, and cells.

The Granoff Center aims to facilitate just that kind of exploration, Fishman says. During the spring semester, the building housed students and faculty from across the University—musicians, cognitive scientists, dancers, computer programmers, writers, and visual artists—all embarked on interdisciplinary creative endeavors. The building is their laboratory, their studio, and their stage. To encourage development of new multidisciplinary courses, professors and students submit proposals to a committee made of up faculty disciplines from the Creative Arts Council.

Nine made the cut this spring. In Experimental Musical Instrument Design, for example, Associate Professor of Music Butch Rovan and Assistant Professor of Visual Art Paul Myoda teamed up to teach the science and art of instrument design, as well as experimental-music composition. Strewn across workbenches in a glass-enclosed space were unique wooden and metal instruments under construction, all in an attempt to take creative ideas about sound and shape and give them physical expression: to make the abstract concrete. The final class project was a recital using these creations. Myoda says the music theorists and the visual artists in the class each brought skills and background the others needed. From the start of the semester, the glass wall separating their studio from the foyer below was covered with sketches and plans for instruments, some of them lovely drawings themselves. "It's the ultimate white board," Myoda jokes.

At the core of Granoff Center is an enormous, freestanding steel staircase whose stacked, oversize landings are furnished with wing chairs and coffee tables. The architects conceived these as "public living rooms," Fishman says, as places where serendipitous encounters and conversations can take place, planting the seeds for collaboration. They're an easy place to plop down after class, continuing one conversation or starting another. And instead of glass panels on landings and along the sides of the staircase, spaces are separated with wire mesh, giving much of the interior the feel of industrial loft space.

The landings are also ideal for showcasing art, as was demonstrated in March with "The Granoff Interventions," a series of site-specific exhibitions that students created for the course The Art of Curating. To explore the notions of public and private space, for example, Zachary Smith '11 cordoned off a landing with a velvet rope and displayed a collection of furnishings that included a rack of gender-bending clothing, a portrait of himself as Beyoncé, and an iPod playing electronic music by Nicolas Jaar '12. Smith called it "21st Century Changing Room," and during a critique he told his classmates that the idea came to him during their recent field trip to New York City's Metropolitan Museum of Art. All those historically accurate alcoves at the Met exhibiting priceless antiques seem to have sparked an equal and opposite contemporary response.

The Granoff Center houses four large multimedia studios and several labs equipped for all kinds of creative work, from dance to metalworking to robotics, as well as a professional-grade recording studio. Open to the public is the first-floor Cohen Gallery, whose walls roll away on tracks to facilitate large events. A half-story down, a 218-seat auditorium is outfitted for thirty-five-millimeter projection and has acoustics by JaffeHolden, which designed the acoustical renovations to the Kennedy Center and Lincoln Center's Alice Tully Hall. The walls are made up of ash boards cut to look like two-by-fours, further reinforcing the effect of a found utilitarian space.

In keeping with the theme of eroding the boundary between interior and exterior space, the back wall of the auditorium is all glass, beyond which is a terraced outdoor amphitheater allowing people sitting there to view events inside. The amphitheater is also equipped for outdoor performances and film screenings, yet another strategy the architects used to snag passersby and entice them into the artistic process.

As fascinating and exciting as the building's design may be, that's only part of the building's purpose, says former Brown parent and trustee Marty Granoff, who with his wife, Perry, gave the lead gift and raised the building's entire $40 million price tag. The ultimate aim, he says, is the art that all that interaction might inspire. Take that class on experimental musical instruments, he says: "That class might lead to a new instrument. Who knows what might come out of that building!"

See a photo slideshow with more pictures of the Granoff Center here.