Brian Lies '85 never much cared for baseball. Or bats, for that matter. Which is ironic, since his latest children's book celebrates both with lustrous illustrations, snappy rhymes, and clever wordplay. "It was a surprise to me, doing a book about baseball," said Lies, who chalks up his baseball indifference to a horrible Little League experience. 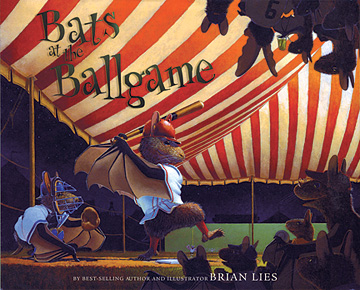 Bats at the Ballgame is Lies' third "bats" best seller—Bats at the Beach and Bats at the Library came first—and he says the series has been a life-changer. He drives a batsmobile—a Nissan Cube tricked out with batty illustrations and, in the summer, a bat on top.

Since drawing political cartoons for the Brown Daily Herald in the ' 80s, Lies has written and illustrated twenty-three books. He says this one grew out of a bad pun he couldn't get out of his mind: "Baseball bats. Baseball bats. Bats at bat." For a year and a half, he lived baseball. He built a replica of a tent his bats play under in the book, complete with a bull in the bullpen), and chickens just outside left field (fowl territory). And yes, Red Sox fans, a pesky pole.

Reader Responses to For Kids