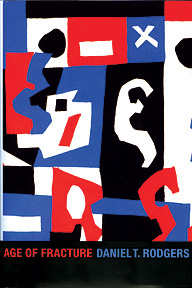 The Age of Fracture by Daniel T. Rodgers '65 (Harvard). This compelling intellectual history runs from Reagan to 9/11, charting the influences that fragmented American social thought—Michel Foucault to Jerry Falwell. Princeton historian Rodgers considers the loss of the Cold War's unifying language; "the collapse of the high-wage, high-benefits 'Fordist' economy" and the new age of markets; the funding of a right-wing "counterintelligentsia," complete with media outlets; and the development of gender and racial identity politics.

The Intimates by Ralph Sassone '86 AM (Farrar, Straus & Giroux). Sassone's debut novel follows close friends Maize and Robbie from high school to a college much like Brown and into their adult lives. The two confide in each other like "human diaries," as Robbie figures out his sexual orientation and both struggle with their un-intimate families and fall in love with the wrong people. Sassone captures the intensity of their friendship, and its limitations.

Come to the Edge by Christina Haag '82 (Spiegel Grau). Haag and John F. Kennedy Jr. '83 ran with the same prep-school crowd in New York City and shared an apartment at Brown—the longest courtship ever, he joked. They fell in love later, when cast together in a play in Manhattan, but after five years split up (a peripatetic actor, Haag blames timing). The book won her a reported $1.2 million advance and is making headlines for its revelations of JFK's flirtations with danger (marijuana, a scary kayaking trip, and a book on Tantric sex). But it's also a touching, if sometimes sappy, portrait of two young people and the obstacles they put between themselves.
What do you think?
See what other readers are saying about this article and add your voice.