After graduation in 2003, Jessica Theroux boarded a flight to Italy funded by an Arnold Grant—a no-strings-attached $15,000—for a research project she called "From Field to Table." Her original proposal was to work with a pair of chefs and their purveyors, documenting how ingredients are grown and prepared. But Theroux quickly shifted her focus away from restaurant food and toward indigenous home cooking. The following year she filmed thirty-five Italian women as they harvested olives, washed beans, and rolled pasta. 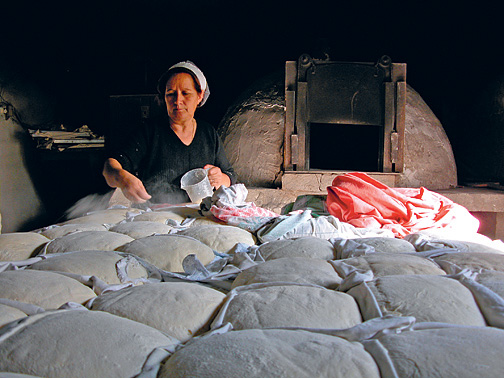 Jessica Theroux
Across Italy, Theroux photographed home cooks, here Raffaela dusts loaves of bread with flour before baking.
Cooking With Italian Grandmothers: Recipes and Stories from Tuscany to Sicily, which the International Association of Culinary Professionals just picked as a "best first book" nominee, is part cultural history, part memoir, part travelogue, and part cookbook. Illustrated with Theroux's photographs—she was a visual arts concentrator at Brown—each of the book's twelve chapters tells the story of a particular cook and gives recipes for a meal or two highlighting her signature dishes.

Theroux's passion for cooking developed after severe childhood medical troubles forced her to change her diet. "I figured, let's make it fun," she says. She started cooking at age eleven and that continued into college. The summer after freshman year she worked at the Esalen Institute in California, and after her junior year she took a year off to attend the Natural Gourmet School. She has since cooked at the Chopra Center and has worked as a private chef.

In Italy, Theroux collected names of women who had local reputations as exceptional cooks. On her website, jessicatheroux.com, you can watch the sturdy Carluccia whack her olive trees with rakes to beat the ripe fruit onto nets on the ground. Picking beans for lunch, she explains how those from one field taste better than those grown in another. 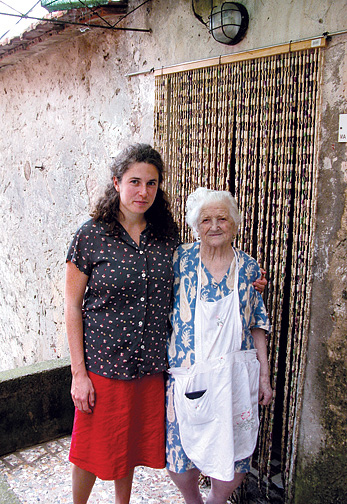 One of Theroux's favorite nonnas was a ninety-six-year-old sharecropper named Armida. They had a tough time talking, since Theroux couldn't comprehend Armida's dialect, but that didn't matter. "We would just sit together in a really peaceful way," Theroux says. "I really loved her. She couldn't see and she couldn't chew. She didn't have any teeth, so her recipes were particularly wonky."

It wasn't always so pleasant though, Theroux says. In the beginning, she would call home from a phone booth, crying. "What am I doing?" she'd sob. "I hardly speak the language. They've given me all this money. Nothing good's going to come of it."

Moving in with total strangers was also unnerving at times. "One family locked me in the family compound for a week and a half until I ate everything the grandmother wanted to cook for me," she says. Worse still, "Her cooking wasn't that good."

This May, the second part of Theroux's project will bear fruit: her documentaries of several of the women will screen at the San Diego Italian Film Festival. CBS plans to feature them on Mother's Day.

Theroux says reporters frequently ask her, "What's the best thing you learned in this project? "—expecting a special pasta recipe or some culinary trick. Instead, Theroux says: "What I learned was to trust myself and what I'm drawn to. Brown and the Arnold gave me permission, in a very tangible way, to follow my instinct. To follow a process."