It all started in high school, says Courtney Mattison, a master's candidate in environmental studies. Growing up in San Francisco, she took classes in both marine biology and ceramics, and found it more satisfying to sculpt the marine invertebrates she was studying than to draw them. 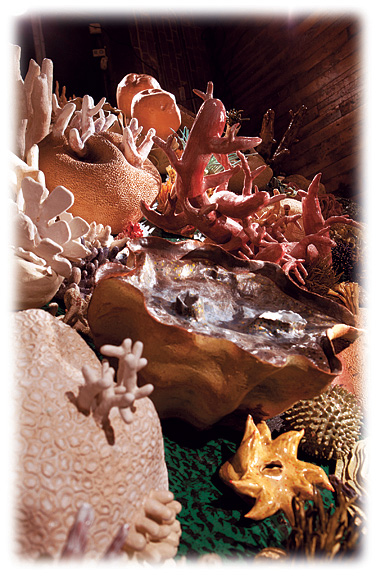 Through June 15, Mattison's 1,500-pound sculpture of a Pacific coral reef is on display in the National Oceanic and Atmospheric Administration headquarters in Washington, D.C. The ten-by-fifteen-foot installation depicts a reef in the process of dying. At right is a detail showing a healthy reef, the home for vibrant anemones, mollusks, and various species of coral. The upper portions of the sculpture show human-caused degradation: bleached dead coral and smothering green algae.

Mattison sculpted, glazed, and fired the sculpture's hundreds of pieces in a studio at RISD, where, she says, her fine arts classmates were bemused by her scientific mindset. Her finished sculpture combines passion and inspiration with environmental science.

Although she began sculpting sea creatures for her own understanding, that's no longer enough. She says she wants to use her art to call attention to the factors that are killing coral reefs worldwide: overfishing, rising sea temperatures, and pollution. "I wanted to bring the problem above the water," she says.