Are Brown students the style mavens of the Ivy League, as Women's Wear Daily has claimed? On April 28, a group of student designers put their reputations on the line, sending their couture creations down a makeshift catwalk at Brown's First Annual Fashion Show. 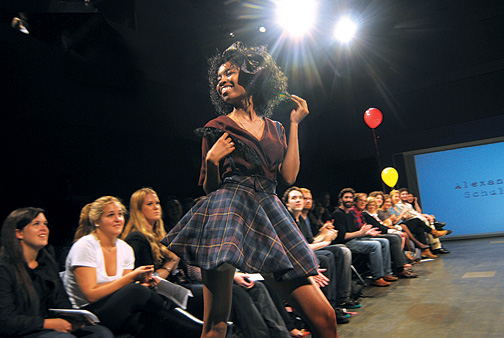 Held in one of the Granoff Center's multipurpose rooms, the event drew about 180 eager students and a handful of faculty and parents, who waited patiently along the catwalk holding long stemmed chrysanthemums while the fledgling designers raced around anxiously in their stilettos and espadrille wedges.

"That's Alex," a student beamed as a tall young woman in a pink tutu flew by. "She's our roommate." Alex was Alexandra Schultz '11, the show's organizer. A classics and computer-science concentrator, she spent last summer interning at Microsoft. "Alex does everything," her roommate confided.

This semester, Schultz created a collection of her own for an independent study in visual arts, and seven more students contributed outfits or collections to the show, using their friends as models. 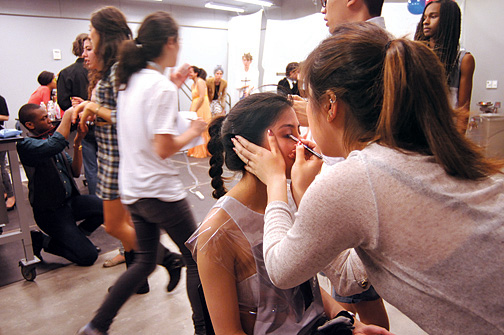 Vivian Carlson '14 opened with a romantic collection of pastel chiffon halter dresses; this summer she plans to work in the fashion industry and study at London's Central Saint Martins design school. History and visual arts concentrator Austin Snyder '13 broke the mood with a Mohawked model wearing a dramatic, shield-like number he'd made in RISD's introductory apparel class. The assignment was to make a dress from recyclables, and he used thin white packing foam and floral netting as well as deconstructed beer cans, and cardboard. (You can see the dress at here.)

Schultz described her perky Ragamuffin collection as "street urchin fairytale": lots of ribbons and flounces. Standing onstage at the end of the show, in her tulle and denim, she wiped away tears as she thanked all the friends and professors who had helped her.

The show was a welcome interlude. Fashion receded the following week as academic life returned in the form of reading period. All across campus students abandoned stilettos for flip-flops and hunkered down to prepare for final exams.

Reader Responses to Show Me Love