In the third floor Chinatown walk-up where New York City artist Ben Rubin '87 builds his audiovisual installations, obscure phrases from Shakespeare are tacked to the wall, and the space is littered with towers of hard drives, broken oscilloscopes, and bins of tools. Here, Rubin and architect Michele Gorman work on a piece called Shakespeare Machine, which was commissioned by New York's Public Theater. Rubin's art, like his studio, is a mash-up of poetry, computer science, cryptology, semiotics, music, geopolitics, and theater. 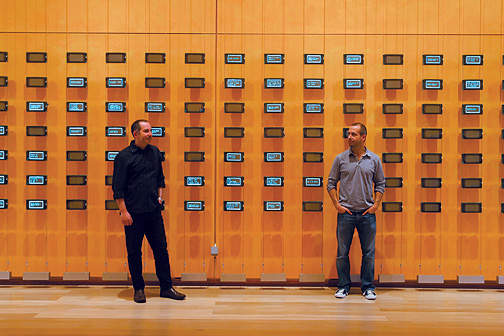 Rubin's installations can be seen in the lobby of the New York Times building, in the Minneapolis Public Library, and at the London Science Museum. He first came to public attention in 2001 with Listening Post, in which he and his frequent collaborator, UCLA statistician Mark Hansen, mine unrestricted Internet chat rooms for fragments of text that they display in real time on hundreds of small LED screens. The screens form a grid that cycles through six different "movements," as the text is displayed and an electronic voice reads or sings it aloud. (Listening Post can be viewed on YouTube.) "It is almost irresistible, like magic," the New York Times noted when the piece was installed at the Whitney Museum in 2003. "It is as if HAL, the haywire computer from Stanley Kubrick's film 2001: A Space Odyssey, were giving an avant-garde poetry reading with subtitles."

In 2006 Adobe Systems commissioned Rubin to create San Jose Semaphore, which can be seen on the company's website as well as atop its headquarters in Almaden Tower. Four ten-foot-wide disks illuminated by 24,000 LED bulbs display a coded message, and a local low-power AM radio station broadcasts a corresponding audio track. It took two local techies the better part of a year to crack the code and announce that the building was broadcasting—painstakingly, one letter at a time—the full text of Thomas Pynchon's The Crying of Lot 49. (Later, Rubin published the code's key—eight pages of tables, algorithms, and words drawn from James Joyce's Ulysses.) 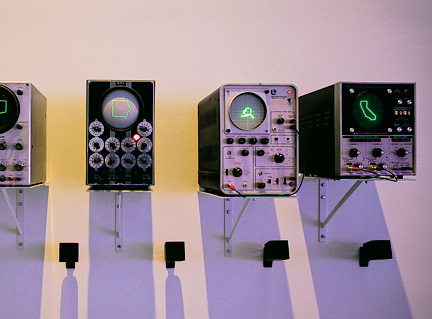 "It's interesting for me to see if you can break language down into atomic particles—reduce it in some way to some sort of essential elemental pile of language," Rubin says. "And then, in reconstructing it, see what sort of poetic new expressions might come out of that."

At Brown, he studied semiotics and computer science and was particularly influenced by computer science professor Andries Van Dam. "I learned more about art and representation in Andy's class than I ever imagined I would," Rubin says.

He returns to his obsession with words with Shakespeare Machine and with another new project, Shuffle, which debuts as part of the New York Public Library's centennial festival in May. For Shuffle, he is collaborating with the avant-garde theater troupe Elevator Repair Service, which made a splash in 2005 with Gatz, reading The Great Gatsby during a six-hour-long production. Now Rubin and the group are shuffling Gatsby's text with The Sound and the Fury and The Sun Also Rises. He is devising a way to generate and deliver the actors' lines to them in real time; the actors will be as surprised as the audience as they shuffle through words that were once familiar and are suddenly strange.

"When you have text that's that finely wrought, it's like you're reframing it," Rubin says. "You're taking it out of this beautiful flow that it's in, and all the context and the rhythms that have been built up, and just zooming into a tiny little particle of it. What's interesting is to see what can be synthesized then, by algorhythmically reconstructing it."

"Artists have always reached for whatever they can get their hands on," Rubin says. "For me, software and other kinds of new technology are what I know. That's what I work with."