At the tail end of the class of 2011, behind all the flip-flopped youthful revelers in the Commencement march, strode a lanky, gray-haired man: Winslow (Jay) Parker ’63, who was capping his fifty-three-year undergraduate career. 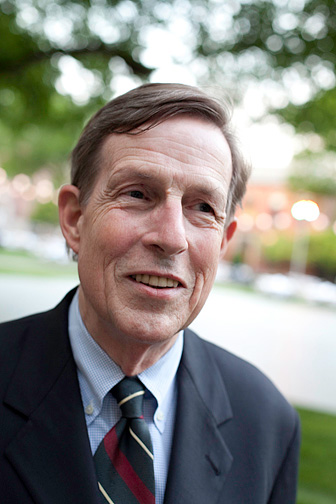 Parker had entered Brown in 1959 with the class of 1963. He’d grown up in Baltimore, the son of a printer, and was the first in his family to attend college. Unsure how to advise him, Parker’s father had called on college-educated friends and colleagues. “I asked them whether I should study marketing or accounting or business,” Parker says, “and to a one, they recommended that I study classics or history or English literature.”

Parker chose the latter, taking an American literature class from the novelist John Hawkes. A percussionist, Parker managed the Brown Community Orchestra, and one of his music teachers was Erich Kunzel ’60 AM, who went on to become the esteemed conductor of the Cincinnati Pops.

But in Parker’s senior year he decided to quit. “I don’t know what was going on in my mind then,” he says now. He moved home to Baltimore and went to work for the family business, Parker Metal Decorating Company, which printed tin for cans of oysters, crabmeat, and other foods.  Several years later, he bought out the company, and expanded it internationally over the next thirty years. When U.S. demand for printed tins dropped in the early 1990s, he liquidated the company and reinvented himself as a consultant, traveling to advise printers in developing countries around the world.

Over the decades, Parker married and raised three daughters, who grew up hearing fond stories about Brown. His middle daughter, Antigone, followed in his footsteps; she graduated from Brown in 1994, and she and another sister both married Brown alumni. Parker even volunteered for BASC, the alumni group that interviews applicants to Brown.

In 2002, he and his wife, Deborah, retired to Princess Anne, on Maryland’s Eastern Shore. That didn’t prove a huge success, though. “I’ve tried to retire several times,” Parker jokes,  “but it just hasn’t worked for me.” He became town manager and then town commissioner. He directs a heritage group dedicated to preserving the region’s rural character, and he and Deborah run a bed and breakfast out of their 1854 house.

Since retirement wasn’t working so well, Parker decided he’d like to take some courses. “You keep learning, you keep living,” he says. He e-mailed Brown and was told that to receive his bachelor’s degree he needed to take just three courses in English, his former major. So he took an English literature sequence and a course on the modern American novel; his teachers urged him to go on to grad school. But that’s the future.

Memorial Day weekend, Parker’s wife and all three daughters traveled to Providence to see him march through the Van Wickle Gates and down College Hill with the class of 2011.