On December 3, 2009, in the middle of her statistics class, Minoo Ramanathan ’11 answered a call on her cell phone. It was her father, phoning from India. 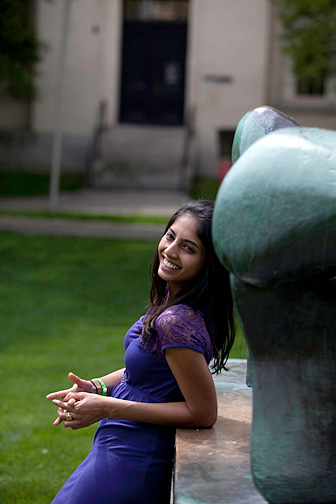 “My parents are South Asian,” she says, “and they have my schedule next to the computer. For them to call me in class like that—that meant there was something direly wrong.”

The previous summer, her mother had been diagnosed with lymphoma, and by fall the cancer had spread to her brain. “Come home,” Minoo’s father said from India. What he didn’t say was that her mother was already dead. “He didn’t want me to be alone when I learned it,” Ramanathan says.

Minoo stayed in India for the cremation ceremony—her family is Hindu—but returned to Brown quickly afterward. “It sounds ridiculous,” she says, “but I came back for finals. I just couldn’t sit around moping.”

A pre-med student, Ramanathan seems to have squeezed every experience she could out of Brown. As a sophomore she enrolled in professor Gary Wessel’s course in synthetic biology, which prepares a team to compete in the International Genetically Engineered Machine (iGEM) competition at MIT. Their project was to engineer a protein to control hay fever “by detecting histamines and scarfing them up,” says Wessel. The group raised $15,000 for the budget, which Ramanathan ran. Over the summer of 2009, while her mother was receiving cancer treatment in India, she stayed in Providence to work with her colleagues. In November, just a month before her mother died, Ramanathan’s team competed against 111 others from around the world at the iGEM competition at MIT. Her team won a bronze medal.

After high school, Ramanathan had taken a gap year to work with children with cerebral palsy in Chennai, India. At Brown she worked as leave-taking coordinator at the Curricular Resource Center, the hub for student-generated academic projects. Inspired by other students’ independent study projects, she organized one of her own, a Group Independent Study Project on Refugee Health Care.
Ramanathan spent last summer working for the International Rescue Commission, and this year she began volunteering for Providence’s African Alliance, raising money to strengthen the safety nets for refugees and recent immigrants.

For Commencement, Ramanathan’s family flew to Providence to join her, her father from Oman, her brother from London, and her aunt from California. After a visit home to Oman, she will return to Providence in August. She has lined up two jobs. One is at the African Alliance, where she will continue her work with refugees. The other is assisting a medical school professor with his research on refugee mental health in Guatemala.

And, yes, Ramanthan will apply to medical schools. She hopes to stay in the United States so she can earn a master’s in public health as well as an MD. One thing she’s learned is that health is not just a matter of medicine.