This is a story about overcoming prejudice, transcending nationality, and fashioning an identity in a global age. 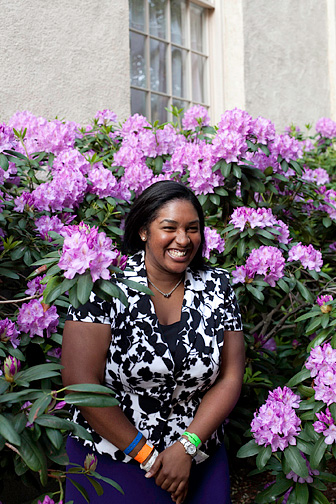 Victoria Giordani grew up in Port-au-Prince, Haiti. The Dominican Republic was fewer than 200 miles away, but to Giordani it seemed like a strange, alien, and hostile place. Dominicans looked down on Haitians, she was told. They made them clean their cars at the border "because they didn't want any dirty bacteria" coming into their country. Dominicans were also lazy and violent, Giordani was led to believe. The prostitutes in Haiti were actually from there. Giordani’s mother had been to the Dominican Republic before her daughter was born, and something strange had happened to her there. She would never tell what it was. Even today, Giordani still doesn’t know.

All of which makes it remarkable that, when Giordani had to choose a place in which to volunteer during her vacations, she picked the Dominican Republic. It is, she says, “the other half of my island. I felt like I had to know it.”

Giordani first traveled to the Dominican Republic during winter break of her junior year. She volunteered to work for the Mother's Wish Foundation, which runs a community center and health clinic in the mountains outside of Santiago. Given what Haitians said about Dominicans, Giordani figured Dominicans might not have very kind things to say about Haitians, either, so she told everyone she was an American who happened to speak very good Creole.

The ruse worked. No one suspected she was Haitian. Both the Dominicans and the small community of Haitians living in the area welcomed her. This, she realized, was a contrast to her experience during the summer of her freshman year when Giordani had volunteered in Haiti. She says was met with suspicion because of her American ways, and accused of skimming money for herself from the charity where she worked, a practice that is all too common in Haiti.

“One guy told me I had taken the money he was supposed to get to buy sneakers,” she says. “It was really, really weird in Haiti. I decided I wasn’t going to go back.” But Giordani, who attended Brown on a Sidney E. Frank Endowed Scholarship, was torn. She was committed to giving something back to her island, even if it was not in her own country. “I have all this knowledge and want to share it,” she says. “I cannot imagine having a lot of luxury when people are dying and suffering.”

So Giordani returned to work with the Mother's Wish Foundation during the spring break of her junior year. She reconciles her feelings for these two countries on the island of her birth by focusing on helping Haitians in the Dominican Republic obtain better health care and schooling. These Haitians accept her wholeheartedly. “They were thrilled I spoke Creole,” Giordani says. “They were happy there was someone there for them if they needed help."

Next year Giordani will teach at a preschool in the Dominican Republic, mentoring adolescent girls, and working with HIV patients. Everyone she’s worked with in that country still thinks she’s an American. Giordani hasn’t yet decided whether to reveal she’s Haitian. She is also considering doing so more volunteer work in Haiti. But at this point, nationality has become less important to her, she says: “I’m a people person. It doesn’t matter if I’m Haitian, Dominican, Brazilian, or whatever. It’s about reaching out and helping others.”