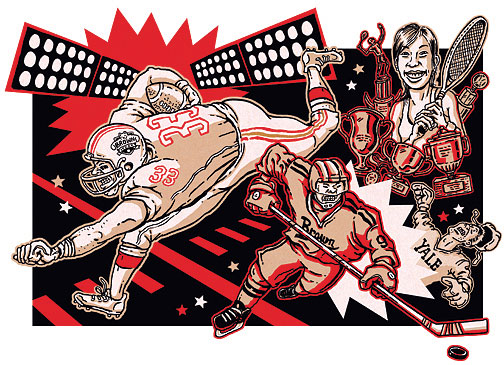 As another academic year came to a close, President Simmons and the Corporation mulled over the future of Brown sports. After a review committee recommended, among other things, eliminating the fencing, wrestling, and skiing teams, the University is evaluating what Simmons says is the "appropriate size and scope of athletics in the context of the University's overall priorities and demands." No final decisions have been made, though it's likely that Simmons will make her final recommendations to the Corporation at its October meeting.

Meanwhile, Brown's athletes have continued to train and compete, handing some top schools surprising defeats and even making a little history along the way. Here, then, is our annual look back at the most notable moments of the 2010–11 season in sports:

Fans waited more than 100 years for lights to arrive at Brown Stadium. On September 25, temporary ones were switched on, and traffic was soon backed up along Elmgrove Avenue, as the neighborhood became crowded with students, alumni, and other fans sporting Brown shirts and hats. You might have thought this was a Big Ten football game and not Brown taking on Harvard at home for its first-ever night home game. The fans' cheering in the packed stadium was one of the best displays of school spirit in decades. Observers who have watched Brown football for more than fifty years agreed that it was a night no one will ever forget.

After dropping a 4–3 decision in the first of two games against baseball powerhouse Texas on March 12, the Bears rallied in game two to defeat the number-five-ranked Longhorns, 7–3. The score was 3–3 in the seventh inning when the Bears scored three runs to seize control. The victory made the Longhorns the highest-ranked team the baseball team has ever defeated. Anthony Galan '14 allowed only one run in six strong innings of relief, while eight different players had hits for Brown. All-time school home-run leader Pete Greskoff '11 hit an RBI double, and Ryan Zrenda '11 contributed a home run. Catcher Matt Colantonio '11 went two for four, with a double and two runs scored.

Men's Hockey vs. Yale and BU

With upset victories over Yale and Boston University, the men's hockey team proved it can beat just about any team in the country. On January 1 at the Shillelagh Tournament in Illinois, Brown dominated number-ten-ranked Boston University, 6–1. Six different Bears found the net, while goalie Mike Clemente '12 stopped forty-one shots. Against Yale on January 16, Brown overcame one-goal deficits twice to secure the win. Harry Zolnierczyk '11 tallied the game-winning goal on a breakaway with forty-six seconds left, giving the Bears a 3–2 upset.

In the final day of the Brown BEAR Basketball Classic in early December, the women's basketball team shocked Florida, 56–50, at the Pizzitola Sports Center. The women proved the basketball adage that good offense begins with strong defense. At one point in the game, both teams went three minutes without scoring. A strong performance by Sheila Dixon '13, who had fifteen points and seven rebounds, was key to the victory.

In his first year as men's soccer head coach, Patrick Laughlin led the Bears to a 12–4–4 overall record, including an undefeated 9–0–3 mark at home in Stevenson Field. Brown qualified for the NCAA Tournament and advanced to the Sweet 16 for the first time since 2000. The Bears finished the season ranked tenth in the country. Welcome, Coach Laughlin!

After averaging 14.6 points per game during Ivy play, men's basketball point guard Sean McGonagill '14 was a unanimous selection as Ivy League Rookie of the Year. His point average was fourth best in the conference, but the night that highlighted his ability was February 4, when he tied the Pizzitola Sports Center and Brown freshman scoring records with a thirty-nine-point performance against Columbia. What made the effort even more remarkable was that it came less than forty-eight hours after a facial injury in practice required twenty stitches and major dental work. McGonagill's thirty-nine points, which came despite his having to wear a protective mask, are the most scored by an Ivy League player since 2003.

Another rookie star this year was Brandon Burke '14, who earned Ivy League Rookie of the Year honors in men's tennis. Burke, who was also a second-team All-Ivy selection in both singles and doubles, posted a 19–12 overall singles record, including a 5–2 mark in the Ivy League. He also compiled a 19–11 mark in doubles action.

Louise Breen '14, a two-time member of the Junior National Eight that won gold at the World Championships, arrived at Brown in 2010 as a highly touted recruit. After earning a spot in the varsity eight as a freshman, she helped the Bears earn silver medals at the Eastern Sprints and secure its fifteenth consecutive trip to the NCAA Championships. Breen also earned the Kate Silver Award as Brown's outstanding first-year female athlete.

Track & field's Margaret Connelly '14 put up a time of 17:29.5 at the 2010 Ivy League Cross Country Heptagonal Championships on October 29— the fastest ever for a Bear at New York City's Van Cortlandt Park. She finished fifth at Heps and earned first-team All-Ivy honors.

Jeff Larentowicz '05 helped the Colorado Rapids win the Major League Soccer Cup and earned his first cap with the U.S. National team. Honorable mention in this category goes to Zak DeOssie '07, a long snapper with the New York Giants, who made his second trip to the Pro Bowl in three years.

One of the most decorated Brown women's tennis players of all time, Bianca Aboubakare '11, graduated this spring with four Brown records, including career marks for singles wins (97), doubles wins (79), and combined wins (176). In addition, she holds the record for doubles wins in a season by a single team, earning twenty with Cassandra Herzberg '12 in 2010.

The women's soccer team suffered one of its most devastating losses in February when it learned that longtime assistant coach Denis Chartier had died. His commitment to Brown women's soccer and his outstanding teaching skills touched hundreds of student-athletes, and he was fortunate to be part of four Ivy League championship squads. A valued friend, mentor, and coach for more than fifteen years, Denis will be missed on the sidelines of Stevenson Field this fall.

Reader Responses to The Year's Bests