A Boy, a Bike, and Burma

As he bicycled around Myanmar in 2006, Patrick Cook-Deegan could somehow feel in his bones the oppressiveness of the dictatorship governing the country. “When you get there, you know something is wrong,” he says. “When you walk down the streets, people keep their heads down, and everything is run-down.” 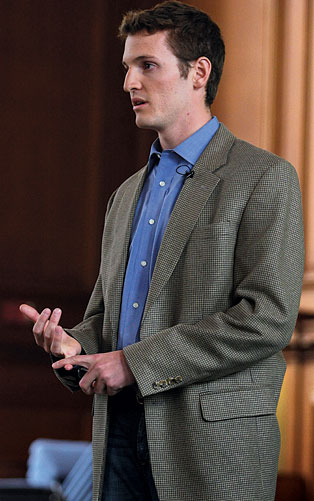 Courtesy Patrick Cook Deegan
Cook-Deegan's life changed forever when he met the people of Myanmar.
Cook-Deegan’s bicycle adventure, which happened after his junior year at Brown, marked the start of his involvement with Myanmar. It was a momentous time in the nation’s history. In August of 2007, tens of thousands of Myanmar citizens rose up in peaceful protest against the military junta that had ruled the nation for five decades. By raising awareness at Brown and keeping in constant contact via e-mail with the Burmese friends he’d met during his bike trip, Cook-Deegan fully enmeshed himself in the country’s upheaval. He then went on to serve as director of strategic partnerships at the Washington, D.C.-based U.S. Campaign for Burma, a nonprofit advocacy group.

Patrick discovered his love for Southeast Asia while taking an “around-the-world” trip in 2005 that ended in Laos and Thailand. He fell in love with the area and returned in 2006 to bicycle across Laos, Cambodia, and Myanmar to raise money for schools. He raised $22,500 to build a primary school in Laos and to provide scholarships for girls in Cambodia.

While in Myanmar in 2006, Cook-Deegan rode 1,000 miles in twenty-eight days. Normally, the government makes it very difficult for foreigners to tour the country, allowing access only to certain areas and forbidding tourists to use public transportation. “But I was on my bike,” Cook-Deegan says, “so they didn’t know what to do with me.”

Still, after three days he spotted a military official trailing him, and the man followed him for the rest of the trip. To avoid him, Cook-Deegan talked to people at night. Cook-Deegan now marvels at his audacity. “I had no idea what I was doing,” he says. “I didn’t know a lot of what I know now, which is good because I wouldn’t have done a lot of the things I did.”

When Cook-Deegan returned to Brown, students, political activists, and monks began demanding democratic reforms in the so-called Saffron Revolution. Cook-Deegan stayed up late at night to chat on the Internet with his Burmese friends. “One of my friends said, ‘I’m joining the uprising,’ and I said, ‘Oh, I’m working on this Foucault paper for school,’” Cook-Deegan recalls. “He would say, ‘Why don’t you join the uprising?’ And I said, “Okay.’” So Cook-Deegan started the Brown Campaign for Burma, raising awareness on campus and petitioning Rhode Island politicians to take action.

After graduation, Cook-Deegan received a Fulbright Scholarship to visit the Thai-Myanmar border, an area that is home to the Karen, an ethnic group that has been the object of a government military crackdown for the last fifty years. (In January, the government declared a cease-fire there.) At the U.S. Campaign for Burma, he focused on getting the U.N. to intervene and stop the government crackdown on dissenters. The long-term hope is for the International Criminal Court to initiate an investigation into human rights abuses there.
Cook-Deegan now lives in San Francisco, where he has found a new way to channel his love and passion for Myanmar. He teaches at Inward Bound Mindfulness Education, an after-school mindfulness meditation retreat program aimed at teenagers in San Francisco. “It’s a secular education program,” he says, “inspired from the heartland of Burma.”

Reader Responses to A Boy, a Bike, and Burma