A Shipload of Work

In 1964, Al Corney ’54 stumbled across a pen-and-ink drawing of an eighteenth-century captain’s sea chest in a magazine. He thought that one day he’d love to build a chest like it. The only problem was that he didn’t have the woodworking skills to do it. So he put the project aside. For forty-six years. 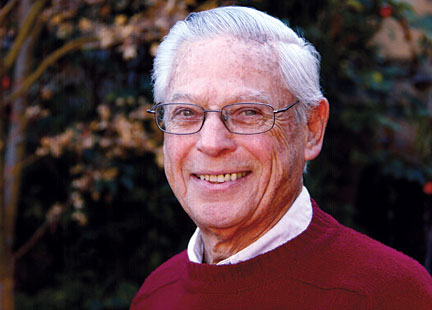 Courtesy Al Corney
Corney is enjoying a blissful retirement building historic ships.
In 2002, Corney retired to Cortez, Florida, the only remaining fishing village along the Suncoast. He chose the village primarily for one reason: It had a boatyard. A wooden boatyard, no less, run by a fourth-generation boat builder whose ancestors built blockade-runners during the Civil War.

Corney began volunteering at the Florida Maritime Museum in 2003, and soon began developing his woodworking skills. Since then, working on boat projects at the museum has become a labor of love. “The whole process of restoring and reproducing things like this just turns me on,” he says. “To make things we can use and enjoy now and also create a legacy so everyone knows what things used to be like—it’s great.”

Corney was president of his class at Brown, earning degrees in economics and political science. After graduation, he worked on marketing and sales in the New York City area. He’s always been handy. On weekends he built furniture and repaired the boats he kept at his family’s vacation house in Pennsylvania.

At the maritime museum, Corney and his fellow volunteers do a mix of public-service charity work and contract jobs to raise money for the museum’s operations. They build boats for use, as well as for display. They built a replica of a twenty-five-foot Spanish longboat used in the sixteenth century. It’s now on display at another museum.

One boat on display at the Florida Maritime Museum is the Esperanza, a Cuban refugee boat that Corney and crew restored after it was found abandoned in the Florida Keys. “It was fascinating because it looked like it had been built out of nothing but spare parts,” Corney says. “Porch railing, house siding, you name it. They’d done a skillful job using almost nothing. We had to replace 85 percent of the planks, but we rebuilt it.”

Wooden boat work takes patience, elbow grease, and sometimes dozens of coats of varnish, he adds. Merely building an oar can take as long as a year. “Oars are complicated, and a lot of people would rather do something they can finish quickly,” Corney says. “So I do them. That’s become one of my hallmarks in the shop.”

And after a few years of boat work, Corney finally felt up to building that captain’s chest, which he gave to his son. He made it out of cypress and even added a special hidden compartment, an extra drawer at the bottom suitable for hiding important papers. Corney is proud of how it turned out.

“I’ve never seen another piece like it, and I never felt competent enough to try building it myself until after working at the boatyard,” he says. “I still feel like I’m an amateur, not an expert. But I’m not bad.”

Reader Responses to A Shipload of Work