On January 7 New England Patriots offensive coordinator Bill O’Brien ’92 traveled to State College, Pennsylvania, to introduce himself as the new head football coach of Penn State’s Nittany Lions. As O’Brien spoke to a ballroom packed with media, boosters, and administrators, he was well aware that many in the school’s vast and skeptical alumni base were already deriding him as a no-name coach with no connection to the university. Intense, ambitious, and smart, O’Brien struck a careful balance between confidence and self-deprecation. When it came to balancing the program’s long, proud history with its recent descent into scandal, O’Brien leaned heavily on the former. 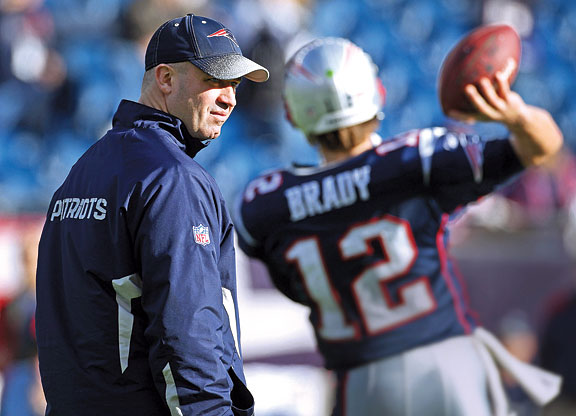 Getty Images
As New England Patriots offensive coordinator, new Penn state head coach Bill O'Brien enjoyed a close relationship with Tom Brady.
Who could blame him? In taking over for coaching legend and fellow Brown alum Joe Paterno ’50—the winningest big-college coach in history—O’Brien had little choice but to emphasize the positive: the top-notch facilities, the huge fan base, and the enviable win-loss record that make Penn State an elite college football program. There was little O’Brien could say about the allegations of rampant child sex abuse by a former Paterno assistant, or about the public outcry over Paterno’s tepid response, which brought an abrupt and stunning end to his forty-six-year tenure. (Paterno died in January. See page tk.) Asked about the fallout blanketing the program for the foreseeable future, O’Brien turned the query on its head: “What’s not to sell about Penn State?”

Convincing top-tier recruits to sign up will go a long way toward determining if the forty-two-year-old O’Brien succeeds in his first head-coach job. A linebacker and defensive end for the Bears from 1990 to 1992—O’Brien says that as a player he once shook Paterno’s hand on campus—he began coaching as a Brown assistant in 1993. After assistant gigs at Georgia Tech, Maryland, and Duke, O’Brien joined the Patriots  in 2007. There he honed his reputation as an innovative offensive mind while coaching Patriots quarterbacks, notably Tom Brady, and later serving as the team’s offensive coordinator.

O’Brien was hired by Penn State after a nearly two-month search during which a six-member committee and the university’s acting athletic director quietly vetted dozens of candidates. Rumors swirled of a high-profile hire, but, as a relatively anonymous career assistant, O’Brien didn’t fit the profile. To make matters more difficult for him, his hiring coincided with an uproar among Penn State alumni—including some prominent former players—who were dissatisfied that neither a member of Paterno’s staff nor a proven college coach got the job.

O’Brien acknowledged the discontent at his introductory press conference, reading from a letter he wrote to “the Penn State family,” and insisting he was up to the challenge. “I’m in charge of this family now—the football family,” he said. “I have a lot of confidence in my ability to lead us through what some people would say is a tough time.”

The skepticism of Penn State fans was countered by praise from the likes of Brady and Patriots head coach Bill Belichick, who called O’Brien’s hiring “a great match between a storied program and an old-school football coach.” Current Bears head coach Phil Estes, who worked briefly alongside O’Brien when both were Brown assistants, expects his friend to succeed for reasons that have little to do with Xs and Os. As Estes told the Brown Daily Herald, “Billy’s not afraid.”

O’Brien’s willingness to embrace the tarnished Penn State name should help him with skeptics. Of course, winning football games won’t hurt, either.

Reader Responses to After Paterno