Birds of a Feather

Few fossils get evolutionary biologists as riled up as Archaeopteryx. Depending on their theoretical point of view, Archaeopteryx is either the oldest known bird or a close dinosaur ancestor of modern birds. Its combination of reptile and bird features is often held up as an example of evolutionary transformation and a refutation to creationists. In fact, given Archaeopteryx’s propensity for coy mystery, evolutionary biology graduate student Ryan Carney calls it the “Mona Lisa of paleontology.” 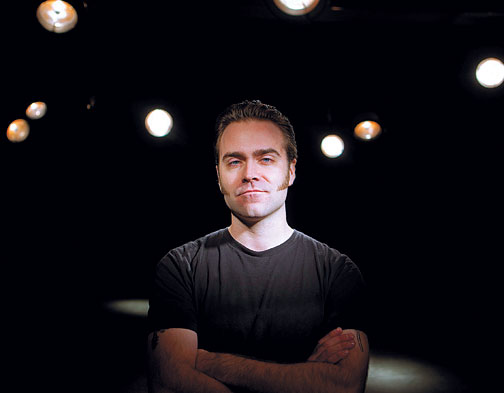 Michael Cohea
Carney solved a major riddle in the field of dinosaur paleontology.
Of course, there is a lot we do know about the fossil. It lived 150 million years ago, had a wingspan of 1.5 feet, weighed about two pounds, took 970 days to reach adult size, and featured a three-finger claw with a hyperextensible second toe. Scientists have even done CT scans of Archaeopteryx’s skull.

But what color was it? In the summer of 2010 Carney traveled to Berlin to examine the only known fossil imprint of an Archaeopteryx feather. When he placed it beneath an electron microscope able to magnify the fossil down to the nanoparticle level, it revealed a cigar-shaped cellular structure. Ever since the fossil was discovered in the mid-1800s, the assumption was that these structures were bacteria. Carney believed differently. He thought they were melanosomes, the organelle inside the cell that synthesizes melanin. Melanin is the pigment that gives feathers their color.

Carney, who has a tattoo of the feather on his upper left arm, next compared the shape of the Archaeopteryx’s melanosomes to those of modern-day birds. Based on its resemblance to a crow’s melanosomes, Carney concluded with 95 percent certainty that the feather was black. He suspects the skin was the same color, though that research still remains to be done.

As it turns out, there are evolutionary benefits to black feathers. Black feathers may have provided camouflage and protection from ultraviolet light. Even more important, because the melanin that produces that color happens to be composed of large, dense molecules, Carney believes that Archaeopteryx’s wing feathers were thick and difficult to fracture. All of which may have contributed to Archaeopteryx’s evolutionary advantage and led to the evolution of modern birds.

Reader Responses to Birds of a Feather