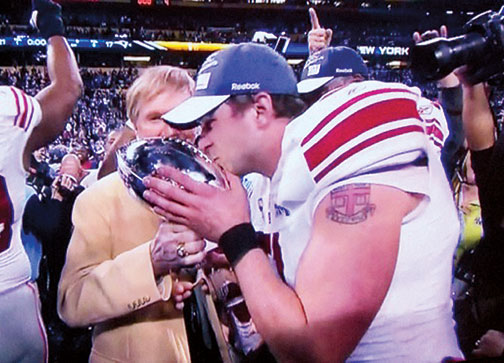 The 21–17 Super Bowl loss in February by the New England Patriots and their offensive coordinator Bill O’Brien ’92 was the thrill of a lifetime for New York Giants long snapper Zak DeOssie ’07. Well, the second thrill of a lifetime. DeOssie was also on the 2008 Giants team that stunned the undefeated Pats in the Super Bowl four years ago. But his truest loyalty? His lips may be on the big trophy, but that tattoo is the Brown coat of arms.
What do you think?
See what other readers are saying about this article and add your voice.