When Lisa Van Dusen went rafting down the Green and Colorado Rivers after graduation, her mother didn’t worry. When Van Dusen’s own son Daniel Kelley ’12 spent the summer of his sophomore year going down the Mississippi River, well, let’s just say things were a little different. “Every time the phone rang,” she says, “I just leapt to see if it was him.” 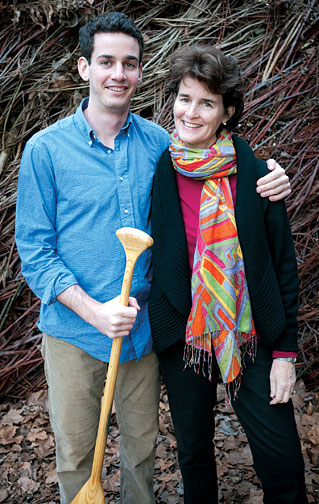 Courtesy Lisa Van Dusen
Mother and son bonded over their adventures.
Van Dusen, who lives in Palo Alto, California, took her trip in the waning days of the 1970s counterculture. Back then, it was all was about finding yourself, getting away from it all, and breaking with your parents’ generation. She and a handful of fellow Brunonians pumped up two rubber rafts and floated through Utah. Her raftmates hadn’t yet graduated, so they used the trip as a Group Independent Study, creating a slideshow about the history and geology of the region and what Van Dusen describes as, “our own deep philosophical thoughts.” Looking back, Van Dusen describes the presentation as “ponderous,” but “it was a different era,” she says.

Getting away from it all isn’t what it used to be. When Kelley shoved off in his canoe with a friend to paddle 1,500 miles from northern Minnesota to Memphis, Tennessee, he took his iPhone, along with a staggering amount of peanut butter. He posted pictures online and kept a blog.

A mother’s worries haven’t changed much, though. “I had a low point on his birthday,” says Van Dusen, a business consultant. “There was a big flood, and I knew they’d gone from a bucolic stream full of friendly Minnesotans to being on an industrial-strength river in their puny little pleasure boat.”

Kelley raised money for his trip through the website Kickstarter.com, which lets users post a proposed project and solicit donations. Supporters at the twenty-five-dollar level received a tiny wooden canoe whittled by Kelley himself. In the end fifty-two people contributed, including strangers from as far away as China and South Africa.

During the voyage Kelley blogged about tornadoes, paddle fatigue, and grumpy harbormasters, but avoided the pitfalls of social networking by posting only when he had something genuinely interesting to say. It would have been all too easy to post breakfast pictures, troll for Twitter fans, or chat up hometown friends on a hands-free headset as he paddled.

When his mom suggested she’d like to see more posts and pictures, Kelley told her “I’m not blogging down the river. I’m going down the river and I happen to be blogging.” Van Dusen got the message, but, while she mostly resisted calling, she never conquered the need to obsessively check for new posts.

“He wasn’t glued to his mechanism. I hand it to him for that,” she says. “I had three interns at my work whose mothers called all the time to check on them, and I thought, ‘Please God, let me not be that mom.’”

Oh, and coming back from the wilderness isn’t what it used to be either. When she returned to civilization, Van Dusen recalls, “I remember how excited we were to see a pay phone.” Kelley says his big surprise coming back from the river was discovering that Jersey Shore had begun a new season.

Reader Responses to The River Wild