The Soul of the Coach

Joe Paterno almost became a lawyer. In 1950 Charles A.“Rip” Engle, who had just become Penn State’s head football coach after leaving the same job at Brown, tried to recruit an assistant from his College Hill staff. Five of his former assistants turned him down. Finally, he turned to Paterno. “A coach!” Paterno’s mother said upon hearing the news. “You didn’t have to go to college to be a coach!” 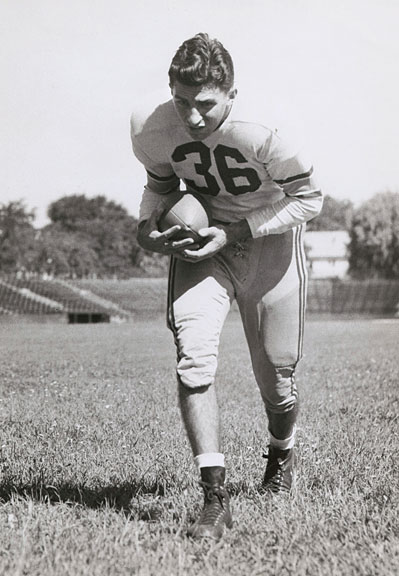 But go to college he did. Born into a Brooklyn Italian Catholic family just before Christmas 1926, Paterno, who died of lung cancer in January, loved reading, a passion that led him to study English literature at Brown, to which he applied after meeting Engle during a college visit. (It also helped that an alumnus offered to pay the way for both Joe and his brother George ’50.) But Joe entered Brown only after his family ignored the warning of Church authorities on the perils of attending a non-Catholic college. “Well, Angelo,” a parish priest told Paterno’s father after being informed of the decision, “the boy’s soul is in your hands.”

At Brown, Paterno also witnessed privilege firsthand, a lesson that stuck with him through his historic forty-six career as Penn State’s head football coach. “I soon understood, but never learned to accept,” Paterno wrote in his 1990 autobiography Paterno: By the Book, “that in those days a typical Brownie instinctively needed to sniff out who your family was and how rich you were.” After pledging for Delta Kappa Epsilon, Paterno was instrumental in persuading the fraternity to become the first on campus to admit a Jewish student.

Under coach Engle, Paterno played quarterback. “He can’t run and he can’t pass,” one sportswriter wrote at the time. “All he can do is think and win.” Engle also used him as a defensive back, and Paterno responded by catching a school-record fourteen interceptions. Choosing to become a lawyer like his father, Paterno had already been accepted at Boston University’s law school when Engle called.

After sixteen years as Engle’s assistant, Paterno succeeded his mentor at Penn State in 1966, and despite later offers to coach at schools such as Boston College and Yale or for professional teams such as the Oakland Raiders and the New England Patriots, he remained loyal to the Nittany Lions. In time, he notched more wins than any other big-school football coach. He led his teams to a record twenty-four bowl games and two national championships. He was not easy to play for. A disciplinarian, he was not shy about cajoling and even yelling at his players. “I’ve never worried about whether the players like me,” he told a reporter in 1998.

Yet, Paterno, or JoePa, as Penn Staters called him, never forgot that football was only a part of college life. His number was in the campus phone book, and he lived in a modest house a few blocks from campus. He usually walked to work. Yet he donated millions to Penn State libraries and endowed an English professorship. He was Penn State’s most successful fund-raiser, and as his schedule allowed, he tried to help Brown raise money as well.

He was known for pushing his athletes to succeed in the classroom as well as the playing field. In 1983, he led a group that devised minimum national academic standards for high schoolers applying for athletic scholarships. “I tell kids who are interested in Penn State not to come unless they’re preapred to do a good job academically,” Paterno once said. “If you don’t you won’t play.” In 1987, Sports Illustrated named him Sportsman of the Year, saying, “Joe Paterno is a beacon of integrity and he knows how to win.” One of his players once noted, “He teaches us about really just growing up and being a man. Besides the football, he’s preparing us to be good men in life.”

Paterno was fired late last year after a former assistant coach, Jerry Sandusky, was arrested for molesting ten boys over a period of fifteen years, sometimes at the Penn State athletic complex. Sandusky was later convicted of molesting all ten boys, several in the football-building showers. "I wish I had done more,”  Paterno said shortly before his death, but the independent panel headed by former FBI director Louis J. Freeh that investigated Penn State's response to Sandusky's actions found that Paterno had opportunities as far back as 1998 to report Sandusky to the police and chose not to do so. Even the most loyal Nittany Lions fans recognized that, despite Paterno's long service and generosity to Penn State football and academics, his seeming lack of concern for Sandusky's victims has tarnished his reputation forever.

"Joe Paterno embodied what Penn State thought it stood for," longtime Penn State professor and dean John Nichols told the New York Times after the release of the Freeh report. "And it is inescapable that he did tremendously positive things for Penn State and intercollegiate athletics all over because of what he believed in. But the foundation of all that has been knocked out from underneath us."

How do some people thrive despite adversity?
Education

Reader Responses to The Soul of the Coach