Great partnerships require trust, commitment, communication, shared sacrifice, and great chemistry. Universities are a fertile ground for great partnerships: just look at all the friendships, marriages, and companies that can trace their roots to college connections. One of the more unusual partnerships to come out of Brown, though, is the one between professional tennis doubles partners Jamie Cerretani ’04 and Adil Shamasdin ’05. 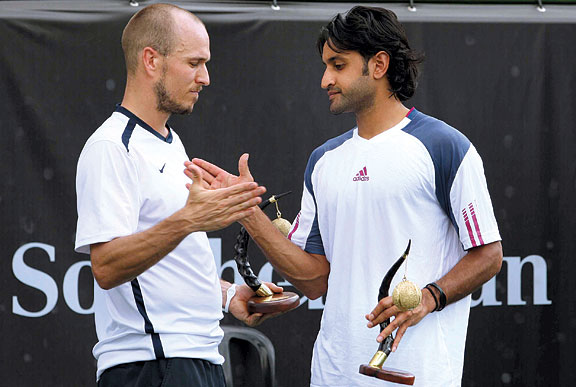 Each player has also found success with other partners. With Australian Chris Cuccione, for example, Cerretani progressed to the quarterfinals of Wimbledon last year, while Shamasdin made it to the second round. And notably, in the first round of the 2009 Davidoff Swiss Indoors tournament, Cerretani and Pakistani player Aisam-ul-Haq Qureshi beat Roger Federer and Marco Chiudinelli. But Cerretani and Shamasdin most enjoy competing together, which they’ve been doing since Cerretani’s senior year at Brown. “That was the beginning of a successful doubles partnership,” says Cerretani. “Those days at Brown were a lot of fun.” Shamasdin adds: “The chemistry worked right away.”

Making the transition from Ivy League to professional tennis is not easy, however. Beyond the higher level of competition, players must deal with a global travel schedule, manage their health and fitness, select their playing partners, and take care of financial, psychological, and time-management issues. No longer are things as simple as a bus ride to Cornell or Columbia, where your hotel arrangements have been made, your food is waiting for you, and you can have a relaxing meal with your teammates. On the pro circuit there can be language barriers, time-zone changes, lost luggage, cab rides to the hotel, or rental cars to book late at night.

In February 2011, Cerretani and Shamasdin had their biggest success together when they combined to win the SA Open in Johannesburg, South Africa. It was Shamasdin’s first Association of Tennis Professionals (ATP) World Tour title, and Cerretani’s third ATP doubles title.

“To win it with Jamie was incredible,” Shamasdin says. “I think we share a special bond that a lot of other players don’t have. It just meant a lot to me, to us as a team, and also to our friendship.”

Cerretani and Shamasdin have also won four events together on the ATP Challenger Tour, including the Jalisco Open in Guadalajara, Mexico, in March.

“I hadn’t seen him in three or four weeks, and then we went down there and won a tournament, and it wasn’t easy,” Cerretani says. “There were some tough matches. There were a lot of matches we could have lost if we hadn’t had that history together, hadn’t had the ability to communicate and keep a very positive attitude.”

Both players enjoyed unprecedented success at Brown. Cerretani arrived on College Hill from nearby Reading, Massachusetts, and after his first season he was named both the Ivy League and Intercollegiate Tennis Association Northeast Rookie of the Year.

Coach Jon Choboy recruited Shamasdin a year later from Canada. Brown took its first Ivy League championship that spring after Shamasdin won the deciding match over Harvard. What made the win even sweeter was that Shamasdin’s mother was there to share the moment with him, along with his brother, who attended Harvard.

“That was an unbelievable experience,” said Shamasdin.

After Coach Jay Harris paired Shamasdin and Cerretani three years later, the pair combined for a 23–3 doubles record and advanced to the second round of the NCAA Tournament. Cerretani left Brown with 120 victories, the school record for career doubles. During his senior season in 2004–05, Shamasdin led Brown to its second Ivy League title and another perfect 7–0 record. He went on to reach the quarterfinals of the NCAA Doubles Tournament with Philip Charm ’06, and both players earned All-America status, the first-ever All-Americans in Brown men’s tennis history. Shamasdin also finished his career with 216 combined singles and doubles wins, a new Brown record.

Even now the two players believe their time playing together at Brown is a key to their success. “Right away, our chemistry is unprecedented,” Shamasdin says. “We know each other inside out.” Cerretani agrees. “Things work automatically with us,” he says, “and that is really fun. Having played with him in college and knowing him for ten years, when we play on tour together now, there are no surprises.”

Both players are just entering their thirties and hope to continue to play for at least another five years. With their careers just starting to peak, they will be exciting to watch.