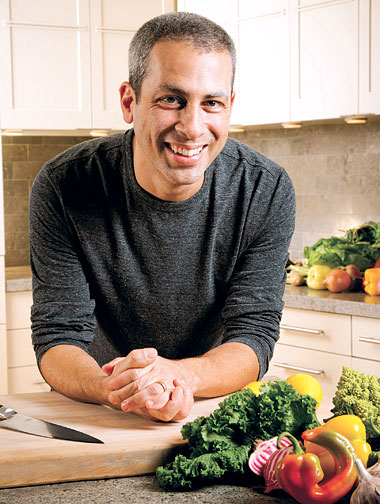 What are the most important ingredients in the vege-tarian kitchen? For those whose experience of meatless cuisine dates back to the Moosewood Cookbook era, the answer might be something like tofu and brown rice. But a new generation of vegetarians relies on such exotica as Spanish smoked paprika and Maldon sea salt, microgreens and pomegranate molasses, kaiware radish sprouts and kecap manis. The new vegetarians are taking restaurant-level tastes and techniques to the table, refusing to compromise on flavor.

The blogosphere is abuzz with colorful adventures in modern meatlessness, and that’s where Michael Natkin ’89 launched the website Herbivoracious in 2007. Natkin, by day a software engineer at Adobe Systems in Seattle, stopped eating meat as a teenager, prompted by the example of a vegetarian girlfriend and by his mother, who adopted a macrobiotic diet after being diagnosed with cancer. “I had been a regular American high school student, eating at McDonald’s every day,” he says. “It happened really fast. One day I wasn’t a vegetarian, and the next day I was.”

Natkin has worked at a number of jobs in programming and computer graphics—helping, for instance, to create dinosaur skin and Terminators at George Lucas’s Industrial Light & Magic. But cooking was always a serious interest, and, by 2007, he says, “I was all hot to start a blog.” Herbivoracious today has 78,000 visitors a month. Along the way, Natkin found time to intern at several high-end restaurants.

Harvard Common Press approached Natkin to write a book that reflects the sensibilities of today’s plugged-in, worldly cooks, both vegetarian and meat eating. Herbivoracious does just that. From its first appetizer (Tea-Smoked Lychees) to its last dessert (Cheese Course with Maple Pickled Pears), it’s filled with sophisticated recipes that are delicious first, vegetarian second.

Yes, there’s tofu here aplenty, but it appears in up-to-the-minute guises like Caramel-Cooked Tofu and Seared Tofu Poke, and Natkin encourages readers to seek out locally made, artisanal tofu. For all that, the book does manage, mostly, to avoid the too-correct preciousness of the locavore movement. Like most successful food bloggers, Natkin has also schooled himself in the art of food photography, and his book is generously illustrated with his color shots.

Some of the more ambitious dishes are a bit, well, aspirational, as when Natkin dips a toe into molecular gastronomy with an Apple-Celery Sorbet that includes glucose powder and xanthan gum. But the bulk of the recipes are within reach of most home cooks, and plenty are downright homey; readers will appreciate his simple tip for taking quesadillas up a notch (it involves brushing the tortilla with oil). And Cheddar-Battered Onion Rings are like pub grub: they’re satisfyingly crunchy—and not in the “crunchy granola” sense.