Scientists look for an AIDS cure in laboratories. Educators teach awareness about it in classrooms. Emma Clippinger ’09 battles the virus on farms. 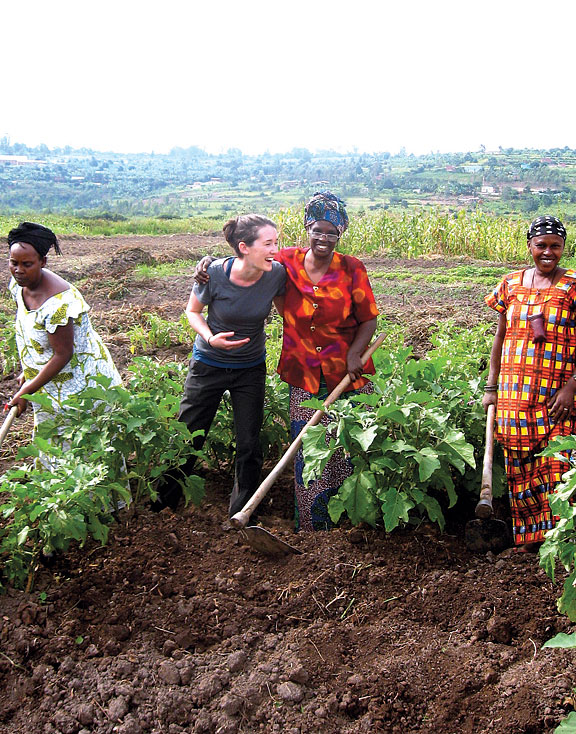 Clippinger at GHI's farm outside the capital of Rwanda.

Clippinger is executive director of Gardens for Health International (GHI), a nonprofit that puts HIV-infected Rwandans on the path toward food sustainability. The organization provides seeds, farming tools, and loans, and offers advice on everything from soaking beans to starting savings groups. More than 1,000 farmers now participate, either improving their farms or starting gardens outside their homes. They grow fruits and vegetables that provide both a nutritious diet and a source of income. GHI also works hand-in-hand with local health clinics to ensure the farmers get the health care they need.

Some farmers, Clippinger says, can support themselves after only one season. “We’re on the front lines,” she says. “You can see results quickly.”

Clippinger first became interested in African development when her appreciation for West African music and dance led to an extended trip to Senegal between high school and college. She was not prepared for what she saw. “That kind of poverty was shocking,” she says. “Something is really wrong with the world when you see children starving unnecessarily and dying unnecessarily.”

At Brown, she spent the summer after her freshman year as an intern for the Clinton HIV/AIDS Initiative in Rwanda. Clippinger says she saw case after case where patients received AIDS medication but then failed to improve because they couldn’t afford food or find shelter.

“They could get access to treatment,” Clippinger says, “but it would really fall apart when they went back to their homes. They were trying to eke out an existence on their small plot of land.”

Back at Brown, Clippinger’s grades suffered while she sought out corporate support for her project. She spent much of her time on campus at the student Social Innovation Initiative office, which offered business advice. “They helped on all fronts, academically and emotionally,” says Clippinger, who concentrated in comparative literature. “There was this community of like-minded students. We were all plugged into each other’s work.” By the time Clippinger graduated, she and cofounder Emily Morell, a Yale student, had raised $150,000 in grants from J.P. Morgan, Staples, and others. To pay for the programs and the salaries of sixteen employees, Clippinger says she spends about 80 percent of her time raising money in the United States.

GHI owns a five-acre farm outside Kigali, Rwanda’s capital. There they grow food for staff, offer training programs, and test out different approaches to farming. “Everyone gets up at sunrise or earlier,” Clippinger says. “The farm is teeming with people. There are cows and chickens. You get milk from a pail. If you walk around in the morning, you see what people are having trouble with in their lives.”

Lurking just beneath the surface of everyday life is the 1994 genocide, in which about 800,000 people, mainly Tutsis, were killed by Hutus in a 100-day paroxysm of violence. There’s no ethnic tension among the employees, but work is occasionally put aside to help a staff member who is overcome by memories of the trauma.

“I can’t even comprehend what some of them have been through,” Clippinger says. “Those memories sometimes come crashing down on them.”