Dressed in uniform and waiting around for the fall 2010 team picture, a group of football players suddenly broke out in song. They sang “A Whole New World” from Disney’s Aladdin. The athletes realized they really didn’t sound too bad. So they formed a new a cappella group, and called it Jockapella. 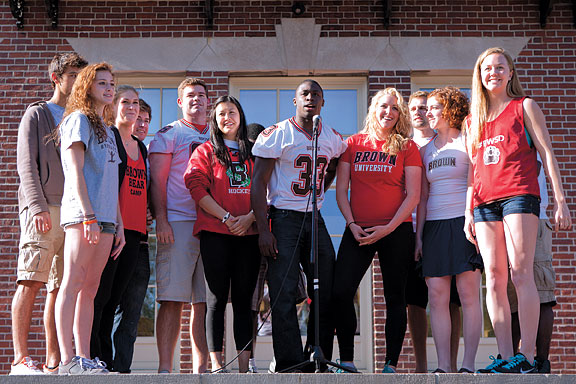 Jockapella is for jocks who like to sing but who are too busy with practices and games to join an existing group. Founded by Brad Herzlich ’14, Jeffrey Izon ’13, and Ade Oyalowo ’14, Jockapella is now in its second year of existence.

Singing a cappella is something linebacker Herzlich has wanted to do for a long time. “Around seventh grade I had to make the choice between music and sports,” he explains. He’d sung in his school choir and experimented with the piano, the violin, and the saxophone, but was so good at sports that his future as a college athlete was almost inevitable. His mother and father had both been standout college athletes, and this year his brother, Mark, won a Super Bowl ring with the New York Giants.

Izon, a running back, has also been interested in music from an early age. He sang in the choir in elementary school and later played in his high school band. Outside linebacker Oyalowo was a senior in high school when he got involved in his first musical production.

Both Izon and Oyalowo argue that football and a cappella singing, seemingly an unusual combination, are perfectly suited to each other. Both are based on a tightly knit community whose members must work together closely in—well, harmony. As a member of the football team, Izon says, “winning is pretty nice, but what I like most is just having a hundred other brothers and going out on the field with them.”

This emphasis on teamwork translates directly to a cappella. In football, Izon explained, when one player false-starts, the whole play gets called back. A cappella singing is a team effort that requires a similar degree of coordination. Jockapella has fifteen members, and, when one person sings a solo, the rest of the singers lay the foundation for his or her success. “It really takes a group effort in the background to make it sound complete,” Oyalowo says. Herzlich adds: “The members of Jockapella are driven and motivated, qualities that come from the skill sets we’ve grown to develop as athletes.”

“Music,” he says, “is something everyone can appreciate regardless of the technical aspects of it. I love it, and just have fun with it.” Oyalowo, too, simply loves to sing. “It’s crazy how you can make people sound so good together,” he says.

For his part, Izon loves the feeling of performing: “When everyone comes together and hits the perfect note, it resonates. I love the feeling of hearing that note and being about to perform it.”

Reader Responses to Jocks Who Rock