It’s not a gesture you’d normally associate with either woman, but there they were, President Ruth Simmons and women’s rights activist Gloria Steinem slapping each other high fives. Steinem came to Brown in early May to participate in a public discussion with Simmons about the iconic feminist’s life and career. “I just think we [women] ought to be able to look however we fucking well please,” Steinem said, when asked about her elegant wardrobe. 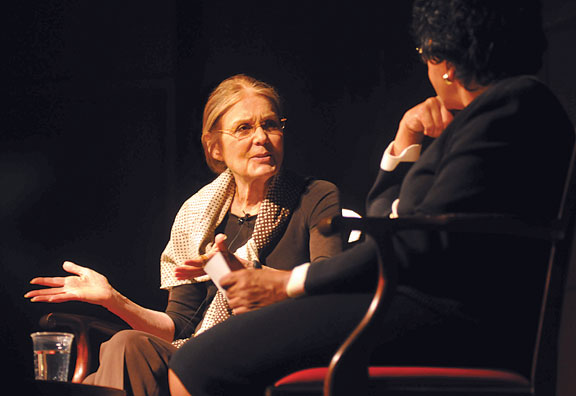 "I thought if I tried to tell the truth and not be invincible ... it would encourage other people," Steinem told Simmons.

“I wanted to ask you why you never ran for political office, but now I see why,” Simmons responded.

The packed Salomon Center audience erupted in laughter and the seventy-eight-year-old Steinem held up her palm for Simmons to slap. Brown’s president seemed a little confused at first about how to respond, but then put up her own hand to complete the midair meeting of palms.

Steinem and Simmons trace their friendship to the late 1990s, when the latter was president of Smith College and Steinem, an alumna, was a trustee. Their respect and admiration for each other was evident throughout their hour-long chat.
“I don’t even know what to say,” Simmons said at the start of the discussion.
“How can you—of all people—say that?” Steinem responded, with mock incredulity. “I did this whole event just to be up here with you!” 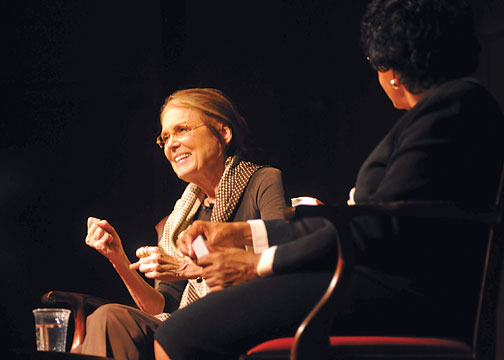 Their conversation followed a screening of the 2011 HBO documentary Gloria: In Her Own Words, a biopic that chronicles Steinem’s life, from her early days in the 1960s as a journalist going undercover as a bunny to expose harsh working conditions at the Playboy Club to the death of her husband in 2003 from brain cancer only three years after they’d married. In between, there was the founding of Ms. magazine, the campaign to pass the Equal Rights Amendment, a life-changing friendship with New York City activist Bella Abzug, and surviving a bout of breast cancer. Simmons asked Steinem why she chose to open up about so many intimate aspects of her life. “I thought,” Steinem responded, “if I tried to tell the truth and not be invincible … that it would encourage other people to tell their stories, to say. ‘Well, if this imperfect person can do x and y, me too.’”

Simmons asked Steinem when she thought there would be a woman U.S. president, to which Steinem answered that she couldn’t predict but believed it would happen eventually because of a fundamental change in the attitude of men. Before the women’s rights movement, men would “associate female authority with childbirth.… When they see a powerful woman, they feel regressed because the last time they saw a powerful woman they were a child.” Men now recognize, she said, that female authority comes in multiple forms.

Asked later by a student what she thought was her greatest achievement, Steinem replied, “Our biggest victory is visible in the home and in public opinion polls. We’ve changed the norm.” She added, “I hope that many fewer women feel crazy if they don’t fit the idea of what a woman should do.”