Federal Express arrived at my house in Connecticut bearing a package straight from prewar Europe. I sat on my front steps looking at two 78 rpm records from the 1920s, one an operetta and the other a Viennese waltz. They were heavily scratched and, incredibly, labeled in German, “Magda Szemere with Orchestra.” 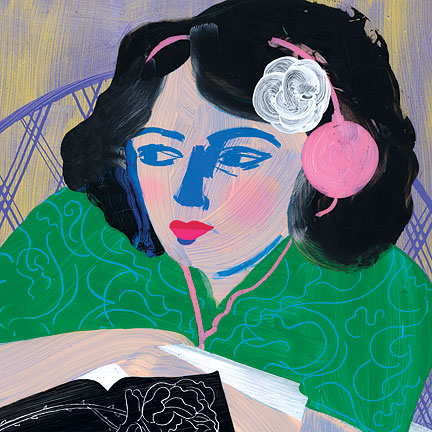 Magda Szemere was a distant relation. A violin soloist from Budapest, she perished in the Holocaust along with her husband and young son. When an elderly relative died in the mid-1990s, I discovered two clothbound scrapbooks filled with Magda’s crumbling concert reviews and photographs. But it wasn’t until last year, when I came across the scrapbooks at the back of my son’s closet, that I decided to take a closer look.

The concert reviews were in French, German, and Hungarian, and the bits I could decipher were delightful. They praised Magda’s youthful maturity, her gypsy-inspired technique. A faded rose was stuck between two pages. Was this an offering from an adoring fan or beau, perhaps?

The scrapbooks contained all that was left of Magda’s life, or so I thought. Curious, I logged onto my computer and typed in her name. There she was. When I blinked at the screen, I expected to find references to a Holocaust archive. I was stunned, however, to see that the entries were on eBay. A German dealer was offering her recordings for eight euros each (about ten dollars). I had no inkling that Magda’s music had ever been preserved, or that it had been worthy of preserving. And I thought I alone in the world was guarding her memory.

I bought the records, and when they arrived I touched them gingerly, as if caring for my elderly relative herself. I longed to hear Magda’s violin, this music that was literally from the grave. But I didn’t have access to a gramophone.

The German records dealer sent me a link to the German Musical Archive in Berlin. There I found a list of Magda’s recordings, forty-eight in all. I caught my breath and typed: “Could I hear the music please? Could they send a CD?” But I was directed to one department after another without an answer.

A friend suggested contacting the music library at a nearby university. The curator of historical recordings was immediately interested. To my astonishment, the collection already included a Magda Szemere record. An e-mail from the curator brought tears streaming down my face: Magda’s music was not just good, he said, it was wonderful. When I later showed him Magda’s scrapbooks, he paid little attention to the beautiful photographs. His only focus was the music. The critics who esteemed her talent, the difficulty of the pieces—that’s what he wanted to know about. How amazing, the curator commented, that I had these papers so close by. How amazing, I replied, that anybody in the world besides me knew that Magda Szemere even existed.

Determined to hear Magda’s music, I continued to search online, often late into the night. Finally, one evening I saw that audio files for two of Magda’s recordings had been posted on a Serbian blog. I was shaking a bit as I put on my headphones. I heard crackling noises and then a slight, airy tune. In the midst of the Roaring Twenties, a few short years before the world went wrong, Magda was playing a sweet Strauss waltz. So vibrant, so romantic, so Hungarian. And so alive.

Susan L. Ross is the author of the children’s novel In Search of Lottie, which won the 2011 Sydney Taylor Manuscript Award.